Home Culture You Listen To This Man Every Day

You Listen To This Man Every Day 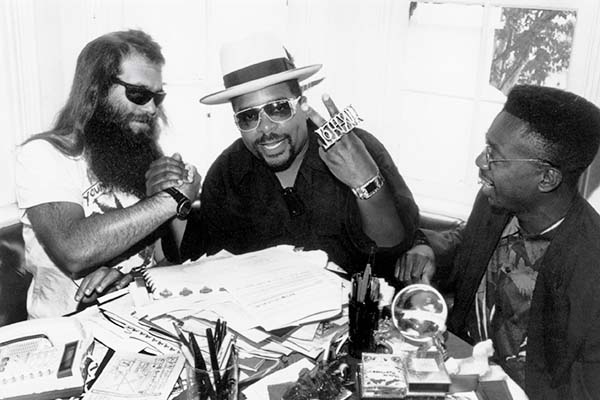 Hit-maker Rick Rubin gets intimate about his last 30 years—and how he’s about to make history.

[dropcap]I[/dropcap]t is a good day to be Rick Rubin. For starters, Rubin, the cofounder of Def Jam Recordings and perhaps the most prominent record producer of the last 30 years, is working in Malibu, California. He’s in the midst of a session at the legendary Shangri-La Studios—the bucolic, residential recording complex set up by The Band in 1976 as “a clubhouse where we and our friends could record albums and cross-pollinate one another’s music,” according to the legendary late drummer Levon Helm. Bob Dylan once lived in a tent in the rose garden; his tour bus is still parked in the backyard. The Band recorded much of The Last Waltz with Martin Scorsese here. Eric Clapton recorded here, too. So did Van Morrison.

On a recent Friday, Rubin is adding horns to a track from the debut solo album by Jennifer Nettles, the lead singer of the country-pop duo Sugarland. He’s padding around Shangri-La—which he is in the process of renovating, mostly by painting everything white—in a plain white T-shirt and pair of black board shorts. His feet are bare. His skin is a smooth golden tan, and what remains of his manic silver-brown hair has turned blond in places—the product of hundreds of hours spent paddle-boarding on the Pacific. His rabbinical beard is as abundant as ever. He looks like a heavy-metal surf bum, or perhaps the world’s wealthiest homeless person.

Business is good as well. Rubin is no stranger to the Billboard charts. Since the mid-1980s, he has been the industry’s very own burly, bearded version of Forrest Gump, appearing in the background, slightly blurry but ever present, at a remarkable number of key musical moments. Since purchasing Shangri-La in 2011—and since parting ways with Columbia Records, which he co-chaired from 2007 until 2012 or so—Rubin has recorded a string of hits right here in Malibu, including Adele’s 21.

But now Rubin may have topped himself. Black Sabbath’s long-awaited reunion album, 13, which Rubin produced, is perched at No. 1 on the Billboard 200. Another Rubin production, Kanye West’s Yeezus, will soon displace Black Sabbath in the top slot, giving Rubin two consecutive chart-topping records by two different acts. Few, if any, other producers have ever managed such a feat. It’s the perfect moment to explore how Rubin got here—from Long Island to Malibu, from New York University to Shangri-La.

How did you come to work on Yeezus?

Kanye called me. I’d just finished working at the studio for about two months on another album, and I was getting ready to go away on vacation for a couple weeks. Then he called up and said, “Can I just come play my album?” And I said, “Sure.” I always like to hear what he’s working on. So he came over to my house in Malibu. We listened. I thought I was going to hear a finished album, but actually we listened to probably three and a half hours of works in progress.

What did the album sound like at that point?

[It was] kind of meandering, unfocused, usually without his vocals. I assumed that the album was scheduled to come out next year. So I said, “When are you thinking of finishing up?” And he said, “It’s coming out in five weeks.” Like completely confident and fine.

Did he realize how much more work it needed?

To me it seemed impossible what he was asking. I remember I wasn’t feeling that well that day, and I was thinking: Is the music making me sick? I don’t feel good about this. We ended up working probably 15 days, no days off, 15 hours a day. I was panicked the whole time.

How did you find a direction for the album?

The idea of making it edgy and minimal and hard was Kanye’s. I’d say, “This song is not so good. Should I start messing with it? Can I make it better?” And he’d say, “Yes, but instead of adding stuff, try taking stuff away.” We talked a lot about minimalism. My house is basically an empty white box. When he walked in, he was like, “My house is an empty white box, too!”

What was the first great song or sound that you can remember hearing?

The Beatles’ “Rock ’n’ Roll Music,” the Chuck Berry cover. I was probably 4, and I can remember feeling electrified. That was the first real rock ’n’ roll I’d heard.

What is it about the Beatles, what made them work?

It transcends everything. It’s much bigger than four kids from Liverpool. For me the Beatles are proof of the existence of God. It’s so good and so far beyond everyone else that it’s not them.

What makes a great song great?

You also produced the Red Hot Chili Peppers’ Blood Sugar Sex Magik. It was a transitional moment for them. Tell me about the genesis of “Under the Bridge.”

I was at [lead singer] Anthony’s house, and he was showing me some books of writing he had done. And I was going through the notebooks and I found this “Under the Bridge” thing. And I was like, “This looks really good. What is this?” And Anthony’s like, “Well, it’s a poem, and a song, but it’s not a Chili Peppers song.” And I was like, “Why not?” And he’s like, “Well, that’s not what we do. We’re a funk band and I rap, and this isn’t that kind of song. This is more of a personal song.” But I pushed him. I said, “Let’s just explore where it goes.”

How would you describe your role as a producer?

Making music that I want to hear. You’re so close to something when you write it that it’s hard to have any perspective on how it hits someone else. My job is to be a professional version of the outside world—a listener who is not attached to any of it, who doesn’t know the story of how it was written, who doesn’t know how it works, who doesn’t know why this is important to you. Every record producer does something different.

How did you first connect with Johnny Cash?

I started the new label after leaving Def Jam. Up until that point most of the artists I’d worked with, at least on the label side, were new artists. But I thought it would be really cool to work with a significant known artist who hasn’t been doing their best work. It felt like it would be a different kind of challenge: a fun, stimulating, new set of problems.

What are those problems?

That’s one piece. Another piece is that there’s a cycle that’s dictated by the reality of being a touring artist. At some point in time the cycle takes over, and even though you’re not really ready to make the record during that window, it’s the only window you have, so you put it out. Cracks in the foundation start. And slowly, over time, the creative process gets eroded, and it becomes something that’s just a window in the schedule instead of the most important thing that drives the whole train.

Some of the songs that you recorded were way outside of people’s idea of Cash. Were there any songs that he needed convincing about, that you felt strongly about?

I felt really strongly about “Hurt.” I probably sent him 30 songs to choose from and he was not like, “I want to do that one.”

How does your production process actually work?

I always request that artists overwrite. Write as much as possible—and then we can narrow down—because you never really know. The best song you write might be No. 25, not No. 12. For every System of a Down record, we’ve recorded probably 30 songs to get the 12 or 14 that are on the record. The same with Chili Peppers.

How do the artists respond to that? Writing songs isn’t the easiest thing in the world.

It depends. If it’s a new artist, they’re open to it because they’ve never done it before and they think that’s how it’s done—and it is how it is done when we work together. But an artist who has made a lot of records, sometimes they’re not really up for that. It was a little bit of a struggle with Black Sabbath, for example. We never got up to 30. But they probably wrote more than 20. We probably recorded 16. And there are eight on the album.

If you had to deliver a diagnosis right now, what would you say is wrong with the record business?

People are willing to get short-term gains at the risk of long-term choices. So, if someone can do something to sell a few more records now at the expense of the artist, even if that artist will sell a lot less later, they’ll make that choice. A lot of it has to do with structure, because the structure of the music industry is rooted in a corporate structure. It’s a quarterly business, but art is not a quarterly business. At Columbia, if Beyoncé didn’t deliver a record one year, for whatever reason, that really affected the whole economics of the company.

What’s the future of the music industry?

I don’t know. I feel like there will be a different version of it. It may not work the exact same way, but people are happy to pay for something good, whether it’s music or a music service or however it works. You can’t expect them to pay if you’re not giving them something of value.

Your taste—your ear—has been spot-on again and again, across genres. What’s the secret?

I never decide if an idea is good or bad until I try it. So much of what gets in the way of things being good is thinking that we know. And the more that we can remove any baggage we’re carrying with us, and just be in the moment, use our ears, and pay attention to what’s happening, and just listen to the inner voice that directs us, the better. But it’s not the voice in your head. It’s a different voice. It’s not intellect. It’s not a brain function. It’s a body function, like running from a tiger.