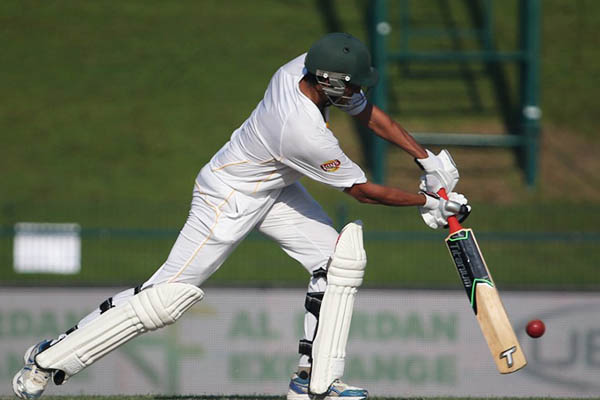 Khan, 37, set the new mark when he reached 20 with a huge six off spinner Moeen Ali, crossing Miandad and Inzamam-ul-Haq’s tally in one stroke.

“It’s a great honor to cross Miandad’s record, which I had never thought I would be able to do,” said Khan, who now has 8,852 runs in 102 Tests. “It was like a wall for me,” he said of Miandad’s tally. “I was a bit nervous today so that’s why I pushed myself.”

India’s Sachin Tendulkar holds the record for most Test runs, with 15,921 in a record 200 matches.

Miandad’s aggregate had stood for 22 years with Inzamam-ul-Haq falling two runs short of equaling the tally in his last Test against South Africa in 2007. Haq finished with 8,830 runs in 120 Tests.

Asked why he did not celebrate the occasion on the pitch, Khan said he wanted to focus on his innings as Pakistan made 286-4 at close on the opening day. “I thought the focus should be on my innings because the team needed runs from me so I put my concentration back after reaching the record,” he said.