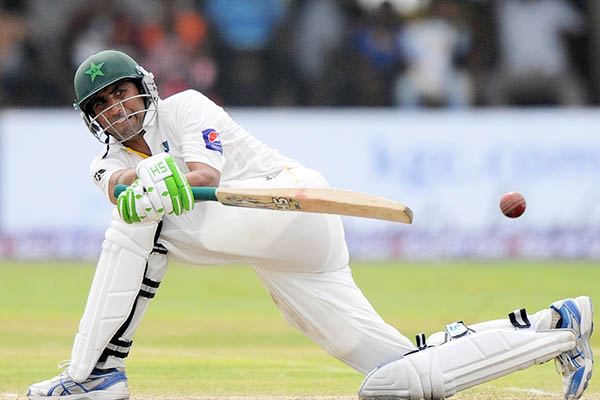 Veteran batsman Younis Khan hit an unbeaten 133 to steer Pakistan out of trouble on the opening day of its first Test against Sri Lanka in Galle on Wednesday.

Electing to bat in overcast conditions, Pakistan slumped to 56-3 before Khan’s rescue helped them recover to 261-4, when bad light ended play two overs early at the Galle International Stadium.

The 36-year-old middle-order batsman, who came to bat in his 90th Test at 19-2, hit 11 boundaries and a six in his 24th century. Only Inzamam-ul Haq (25) has more Test hundreds for Pakistan. Skipper Misbah-ul Haq, making 31, put on 100 for the fourth wicket with Khan before he was caught behind off left-arm spinner Rangana Herath.

Asad Shafiq ensured the effort wasn’t wasted as he helped Khan add 105 for the fifth wicket, himself returning unbeaten at close on 55.

Pakistan’s coach Waqar Younis said he was delighted at the total his team was able to post after the early setbacks. “Any coach or captain will be proud of that,” the former fast bowler said. “It all boiled down to experience. Younis has tons of it and so does Misbah. There was a lot of talk at home of whether Asad Shafiq deserved to be in the side. He showed today that he belongs to the highest level.”

Younis said it was a bold decision by the team management and the captain to bat first despite favorable overcast conditions for the bowlers. “With so much rain around, there is bound to be some juice in the wicket and I thought we were very bold to bat first. That paid off because the wicket eased up by afternoon.”

Sri Lanka’s coach Marvan Atapattu admitted it was hard work for the bowlers after the morning session. “The moisture dried up and it became easy to bat out there,” he said. “I think we have done well to keep them down to 261, but a lot still remains to be done. This is a wicket that usually plays well on the first two days, but spin is going to be a factor later in the match.”

The partnership between Khan and 40-year-old Misbah came after Sri Lanka dominated the morning session with three quick wickets. The start was delayed by 30 minutes due to a wet outfield caused by overnight rain. Bad weather has been forecast on all five days of the Test.