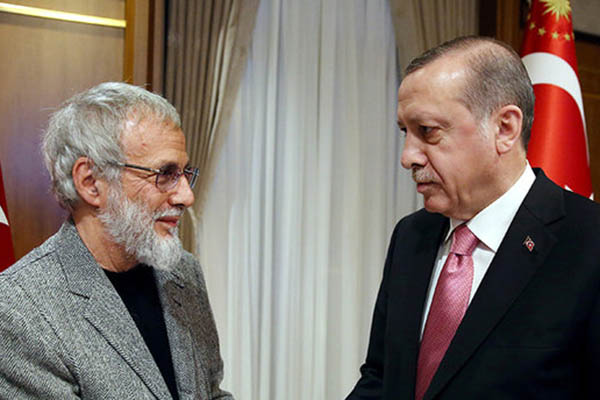 British musician Yusuf Islam, formerly known as Cat Stevens, met Turkey’s leader and thanked the country for its support for a mosque being built in Britain’s university town of Cambridge, state media reported on Thursday.

Islam, 68, recorded several major hits as Cat Stevens in the late 1960s and 1970s. He converted to Islam at the height of his fame in 1977. “In a sense, Cambridge is the brain of the English community. For this reason, it’s very important to have a mosque that reflects British style and culture in the intellectual heart of Britain,” Islam told the state-run Anadolu news agency. “It is great to see such support,” he added after meeting Turkish President Recep Tayyip Erdogan on Wednesday.

The Abu Bakr Jamia Mosque in Cambridge will have room for up to 1,000 worshippers and is due to open in 2018, Anadolu said. The Turkish Religious Affairs Directorate known as Diyanet contributed to the mosque’s construction in eastern England, the agency reported.

A smiling Islam was seen shaking Erdogan’s hand in a picture taken at the presidential palace and shared on the Turkish presidency’s website. The two held a meeting, which lasted one hour and 15 minutes, Anadolu reported.

In a tweet containing an image of the two men meeting, Erdogan said he thanked his “dear brother Yusuf” for visiting the palace and said “welcome to Turkey.”

Islam previously met with Erdogan, then prime minister, in August 2013 in a bid to get financial support for the Cambridge mosque.

Deputy Prime Minister Numan Kurtulmus said on Twitter he had met with Islam and others with the singer and discussed the support given by Diyanet. The folk-pop singer also praised Turkey’s “incredible” handling of the refugee crisis. Ankara says it is home to over 2.7 million Syrian refugees and 300,000 Iraqi refugees.