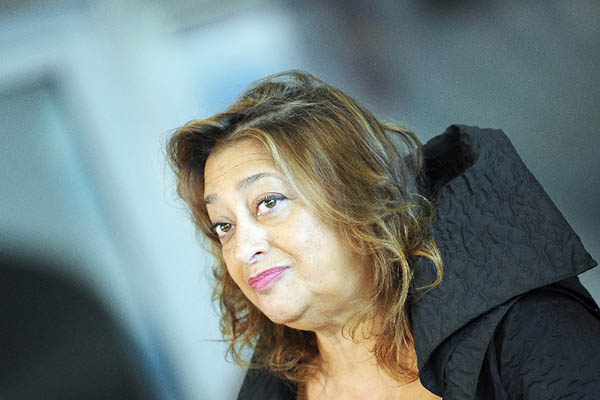 Architect is first individual woman to win the coveted award.

Known for works including the Guangzhou Opera House in China and the London Aquatics Centre, Hadid was presented the medal by the Royal Institute of British Architects after her selection was personally approved by Queen Elizabeth II.

“I am very proud to be awarded the Royal Gold Medal, in particular, to be the first woman to receive the honor in her own right,” Hadid said. “We now see more established female architects all the time. That doesn’t mean it’s easy. Sometimes the challenges are immense. There has been tremendous change over recent years and we will continue this progress.”

Hadid joins Frank Gehry, Norman Foster and Frank Lloyd Wright in receiving the medal, which has been awarded since 1848 to groups or individuals who have had a strong influence “either directly or indirectly on the advancement of architecture.”

Hadid’s work is recognizable for its sweeping curves, but has sometimes been criticized for extravagance and cost overruns. Most recently, she was embroiled in a row after Japan ditched her design for a new national stadium for the 2020 Tokyo Olympics as expenses spiraled and due to complaints over the design.

Fellow architect Peter Cook, a founder of avant-garde group Archigram, which won the award in 2002, praised Hadid as he presented the medal. “Let’s face it, we might have awarded the medal to a worthy, comfortable character. We didn’t, we awarded it to Zaha: larger than life, bold as brass and certainly on the case,” Cook said. “Our heroine. How lucky we are to have her in London.”

Hadid was made a Dame Commander of the British Empire in 2012 in recognition of her work in architecture.