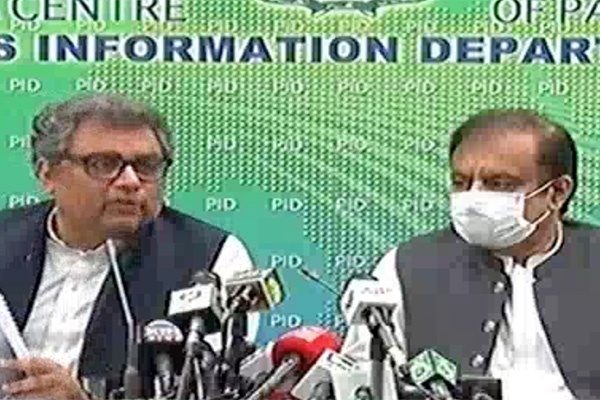 Shipping and Maritime Affairs Minister Ali Haider Zaidi on Tuesday accused the Pakistan Peoples Party, which governs Sindh province, of tampering with a Joint Investigation Team report into the allegations against Uzair Baloch and urged Chief Justice Gulzar Ahmed to take suo motu notice of it.

Addressing a press conference alongside Information Minister Shibli Faraz, Zaidi claimed the report was only made public because of his pressure. “We [PTI] have come into power to change the country and to do that, it is necessary to implement a system of rewards and punishments,” he said, claiming the JIT was a matter of national importance because Baloch had admitted to personally murdering 158 people. “Such incidents do not happen without government protection,” he claimed.

Hitting out at the released report, Zaidi claimed that despite the sweeping powers granted to the investigators, it was curious that they did not clarify who had backed Baloch in committing his crimes. He claimed that an original draft of the JIT report had implicated senior PPP leaders, including Faryal Talpur, Qaim Ali Shah, Zulfiqar Mirza and Abdul Qadir Patel.

Reading out the sworn statement of Baloch, the shipping minister said the Lyari gangster had requested round-the-clock security because he feared he was under threat from former president Asif Ali Zardari. Presenting an “unsigned” JIT report, Zaidi claimed it was 43 pages, compared to the 35 released by the Sindh government.

The original report, claimed Zaidi, only contained the signatures of four representatives of the JIT and had not been signed off by all six members. “There are signatures of Uzair Baloch on every page of the JIT report that I have with me,” he claimed, adding that he was not afraid of the PPP taking legal action against him.

The minister also appealed to the chief justice to take suo motu notice of the alleged tampering of the JIT report. “I appeal to the chief justice of Pakistan to take suo motu notice on this matter,” he said. “Whoever has been named in this report should be questioned,” he said, adding that Prime Minister Imran Khan fully supported his stance on this.

The minister also took aim at the Baldia factory fire JIT, which was also made public by the Sindh government a day earlier. Zaidi claimed the report was made public “with great difficulty,” adding that it clearly showed that it was the result of police inefficiency. “When Sindh Police SP Rizwan released the report, he was transferred to Shikarpur,” Zaidi claimed. “Farhan Ghani removed an honest police officer,” he added.

Earlier, the information minister said that the PTI wanted to rid the country of anyone who supported gangs. “Zaidi raised this [issue] in the National Assembly because we believe that the purpose of JITs is to tell the people the facts,” he said, adding that “some parties” had harmed Sindh province for their personal interests.