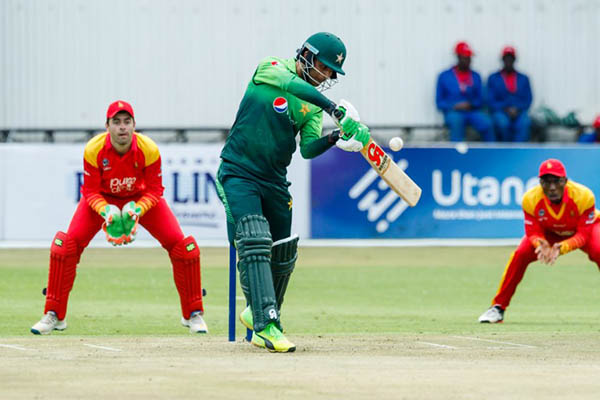 Fakhar Zaman became the first Pakistani player to hit a double century in one-day internationals as the national cricket team cruised to a massive 244-run win over Zimbabwe in the fourth ODI at Queens Sports Club on Friday.

Zaman smashed 210 not out from 156 deliveries, moving past the previous record for a Pakistan batsman set by Saeed Anwar with his 194 more than 21 years ago, and Pakistan batting coach Grant Flower called his innings “a great achievement.”

“I’ve done a lot of work with him in the nets, but he’s got a lot of natural talent and he’s worked really hard,” Flower said of Zaman, who once served in the Pakistan Navy before turning to cricket. “Coming from his background, being in the navy and being very raw when he first came into the set-up, his technique has come a long way. But he’s still got a lot of his naturalness, and I think that’s his biggest asset. He showed a lot of mental strength today.”

Anwar’s wasn’t the only record to tumble.

Pakistan’s openers blazed to a world record 304-run stand, with Imam-ul-Haq hitting 113, to set up their innings, the triple hundred partnership becoming Pakistan’s biggest for any wicket in ODIs. It also broke the previous record for an opening stand in all internationals, set by Sanath Jayasuriya and Upul Tharanga for Sri Lanka against England at Headingley in 2006.

“He had a couple of shots where he might have given it away, but he had a bit of luck,” said Flower. “But a lot of times when you play with confidence and bravery, the luck goes your way. Hats off to him, it’s great to see.”

When the gargantuan opening partnership was eventually snapped, Asif Ali arrived at the crease and immediately went on the attack, smashing 50 from 22 deliveries to help boost Pakistan to another record: their highest ever total in ODIs. “The difficult thing is he’s a guy who likes scoring square of the wicket, and on the type of wickets we’re playing on it’s quite hard to get him out if it’s not nipping around,” Zimbabwe seamer Donald Tiripano said of Zaman. “You need to make sure you don’t give him room, try and tuck him up and bowl closer to off stump. And try and force him to hit straight, or in the ‘V.’ And if you bowl short he’ll hit you square.”

Zimbabwe’s response never got going, and they were lucky to avoid a few other ignominious records when they were bowled out in the 43rd over for just 155.

Zimbabwe’s 244-run defeat was their second heaviest in ODIs, and they avoided that calamity only through a 69-run sixth wicket stand between Elton Chigumbura and Tiripano. But that was as good as it got for the hosts, with leg-spinner Shadab Khan taking 4-28 as Pakistan wrapped up the innings having barely broken a sweat.

The fifth and final match will take place at the same venue on Sunday with Pakistan looking to complete a 5-0 sweep.