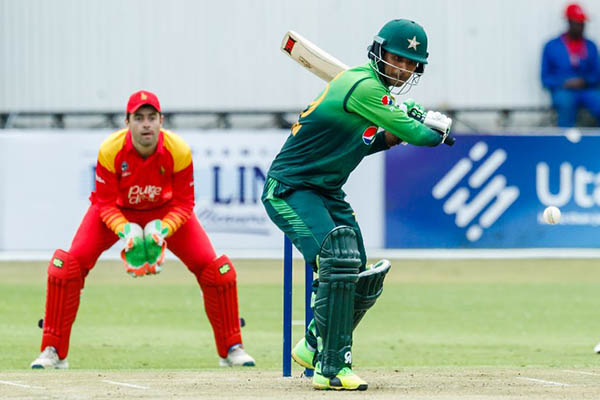 An elated Fakhar Zaman cracked a career-best 117 as Pakistan dominated with both bat and ball to win the second of five one-day internationals against Zimbabwe by nine wickets on Monday.

Zaman’s hundred was his second in ODI’s after his barnstorming 114 in last year’s Champions Trophy final against India.

The win was also set up by Pakistan’s seam attack, who bowled Zimbabwe out for 194. Usman Khan took four wickets and Hasan Ali chipped in with three for 32 to bowl the hosts out, Pakistan’s top order batsmen then capping a commanding performance.

Zaman said: “I think I am in the best form of my life. I’ve been trying for many games to get another hundred and my coaches were telling me there have been too many games since you last scored a hundred. So I was trying, and today I was lucky.”

Zimbabwe opted to bat first on another cold morning and were put under immediate pressure by the new ball, and in particular Khan. He had both openers caught behind in his first spell, but Zimbabwe briefly rallied during a 62-run partnership between Zimbabwe captain Hamilton Masakadza and Tarisai Musakanda.

That was Zimbabwe’s best stand of the innings, however, and when Khan took two wickets with consecutive deliveries in the 44th over the hosts were 166 for 7 and sinking fast.

Moor cobbled together stands with the lower order to keep his side ticking along, and brought up a third ODI fifty in the 48th over. But when he fell attempting to up the run rate soon after, Pakistan made short work of Zimbabwe’s tail to bowl them out four balls short of a completed fifty overs.

“Only playing six batters makes it a bit tough, especially if you lose early wickets because then the guys who come in have to consolidate for a bit,” Moor said. “It was nice to get a few runs personally, but I feel like I left a lot of runs out there that I could have got. I didn’t play my natural game, but that boils down to the fact that I knew there weren’t too many batters coming in after me, so I had to rein it in a little bit.”

“This is one of the best attacks I’ve faced in international cricket,” Moor said of Pakistan’s bowlers. “They’re always looking to get a wicket, and they keep coming hard at you whether you’re two down or eight down.”

Zimbabwe could not match Pakistan’s precision and menace with the ball and openers Zaman and Imam-ul-Haq took 54 from the Powerplay without ever giving more than a half chance to the fielders. They took their opening stand to 119 before Haq was run out, against the run of play, for 44.

Zaman raced past a run-a-ball fifty untroubled by the Zimbabwean attack and reached three figures in the 32nd over. With Babar Azam for company, he quickly knocked off the remaining runs required for victory, sending Pakistan 2-0 up in the series in the process.

The in-form Zaman was named Player of the Series after the T20 tri-series in Harare, and he has now scored a hundred to go with four fifties on this tour.