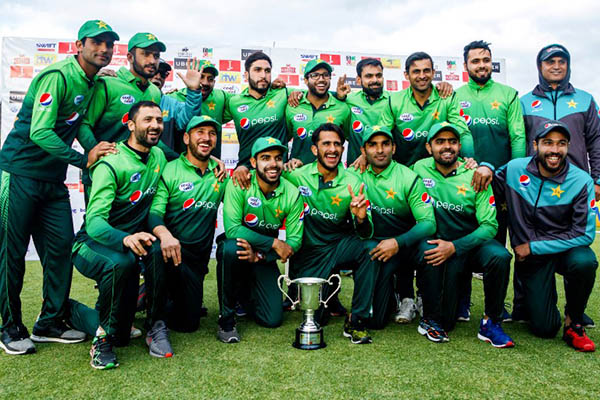 Captain Sarfraz Ahmed hailed “a great team effort” as Pakistan completed a series whitewash over Zimbabwe with a 131-run win in the fifth and final match on Sunday.

On another record setting day in Bulawayo for the visitors, Fakhar Zaman became the fastest player in history to reach 1,000 career runs in one-day international cricket as Pakistan amassed 364 for 4.

“It was a great team effort to win 5-0 against Zimbabwe,” said Ahmed. “Everyone wanted to bat…but at the same time it’s really good to see young players performing like this, like Fakhar Zaman and Imam-ul-Haq have been doing, which is good for the team.”

Ahmed looked ahead to the six-team Asia Cup in Abu Dhabi and Dubai in September. “We learned lots of things here, and hopefully we’ll take that to the Asia Cup,” he said. “We definitely need some rest now, so we’ll go home for a bit before returning to training to prepare for the Asia Cup.”

Zaman and opening partner Haq were in the runs once again, the pair adding their fourth century stand of the series. They had reached 168 in the 25th over when Zaman was caught behind for 85.

While he missed out on what would have been his third hundred of the series, he set a string of records.

Zaman passed 1,000 ODI runs in just his 18th innings, breaking the record of 21 innings held by five players, including Viv Richards and teammate Babar Azam. He claimed the record for most runs by a Pakistan batsman in a five-match bilateral series with 515, passing Salman Butt’s total against Bangladesh in 2008. Only Virat Kohli, who hit 558 for India in South Africa last winter, has scored more.

Zaman also broke the record for most runs between dismissals in ODIs, with 455, passing the 405 set by another Pakistani, Mohammad Yousuf, also against Zimbabwe, in 2002-3. “I really enjoyed my time in Zimbabwe,” said Zaman, who was named Player of the Series. “In 2016 I was here with Pakistan A, and now I’m back with the full Pakistan team and really enjoying my time here. I’m taking my time at the start and just punishing the bad deliveries. That was the main thing for me. I’ll work hard and hopefully you’ll see me scoring more runs for my country.”

On a morning for batsmen, Haq went on to reach his third century of the series, and though Shoaib Malik and Asif Ali fell cheaply, the carnage continued with Azam then racing to a century from 72 deliveries, his second fifty having taken just 17 balls.

In response, Zimbabwe showed much more stickability with the bat than in the first four games of the series. Hamilton Masakadza and Tinashe Kamunhukamwe shared a 66-run opening stand, Zimbabwe’s best of the series.

Though Zimbabwe never looked like threatening Pakistan’s total, the middle order did at least hold firm. Prince Masvaure made 39 and Ryan Murray contributed 47—personal bests for both players in their short careers. Peter Moor finished off 44 not out in a 67-run stand with Elton Chigumbura, allowing Zimbabwe to reach 233 for 4.

“We were slightly better today, we weren’t 3 down for 30 for a change,” said Zimbabwe captain Masakadza. “A few of the guys have been introduced to international cricket. We’ve been shown just how big the gap is, and how much work there is to be done before our next series.”