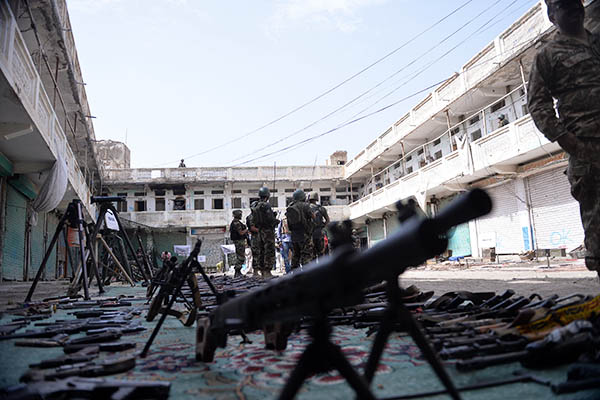 The airstrikes targeted hideouts in the Dattakhel, Marsikhel and Kamsham areas of the North Waziristan where the military is fighting Pakistani Taliban and foreign militants. “Six terrorist hideouts were destroyed through aerial strikes in North Waziristan. Today 30 terrorists have been killed,” a statement issued by the ISPR said. Neither the death toll nor the identity of those killed could be immediately verified.

Earlier, the military announced that Operation Zarb-e-Azb had cleared Miranshah, Mir Ali, Boya and Degan of all militants while engagement with pockets of resistance was underway. It also said that a large number of improvised explosive devices (IED) and an IED factory had been discovered during the clearance operation of Mir Ali.

Pakistani jets and artillery began hitting rebel targets in mid-June to try to regain full control of the district and ground forces moved in on June 30. The assault by Pakistan’s military was launched after a dramatic attack by militants on Karachi airport that killed dozens of people and marked the end of a faltering peace process with the Pakistani Taliban. The Pakistani Taliban and the Islamic Movement of Uzbekistan claimed joint responsibility for the Karachi airport attack.

More than 550 militants and 29 soldiers have been killed in the assault so far, according to the military. The fighting has also displaced some 800,000 people into towns that border the tribal areas where they face testing conditions amid a lack of food rations and high rents.

There have been fears that many top militants fled the region before the launch of the operation, including fighters from the feared Haqqani network, which is blamed for numerous bloody attacks in Afghanistan.