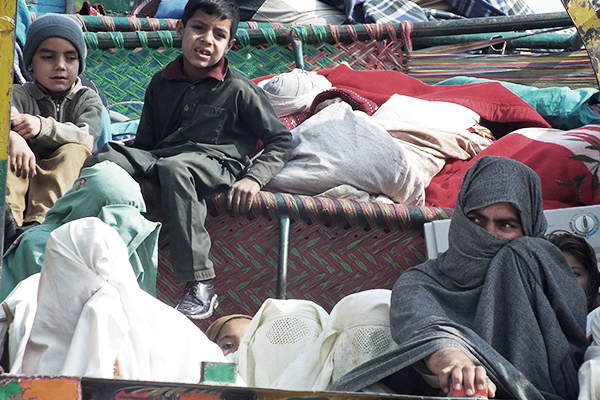 Senior government official says they can stay in Kurram but cannot use it as route to Afghanistan.

The Kurram Agency tribal area has banned internally displaced people from entering it via North Waziristan, citing security concerns and illegal border crossings, according to a senior government official.

“Many IDP families fleeing [Operation Zarb-e-Azb] are traveling to Kurram Agency and then crossing the porous border to enter Afghanistan,” said Shakir Khan. “To prevent this illegal migration, the Government of Pakistan has ordered that the tribal area be closed off to all IDPs,” he added.

However, Khan, added, this did not mean the IDPs staying in Kurram Agency were at risk of expulsion. “We have not banned them from staying in Kurram Agency as our guests,” he said. “However, it is embarrassing for the government that our IDP brothers and sisters were preferring to travel to Afghanistan rather than stay in Pakistan and allow us to help them,” he added.

According to Khan, the ban will stay in place indefinitely, or until the government orders it to be removed.

Shortly after the government launched Operation Zarb-e-Azb on June 15 to “eliminate” terrorists from the North Waziristan tribal area, reports emerged that over 100,000 IDPs had fled across the border to Afghanistan. Afghan officials in Khost province, which lies on the Pak-Afghan border, claimed that over 100 Pakistani families had registered as refugees. The Government of Pakistan and the Pakistan Army, however, have rejected these claims.

“These figures are wrong, as we have confirmed the information and there are only a few hundred individuals that migrated to Afghanistan,” said Maj. Gen. Asim Bajwa, the director general of the military’s media cell, at a media briefing last week.

Since the launch of Operation Zarb-e-Azb, 895,423 IDPs have fled North Waziristan, according to the FATA Disaster Management Authority. There is no official estimate for people who have fled across the border to Afghanistan.