Home Latest News Zardari Steps Down as President of Pakistan

Zardari Steps Down as President of Pakistan 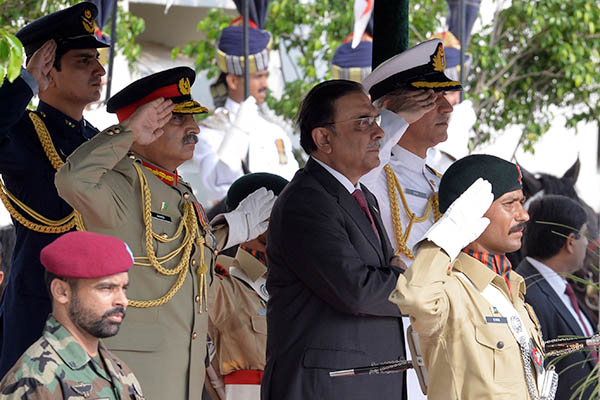 PPP leader says he has no intention of running for prime minister in future; will reorganize party.

President Asif Ali Zardari stepped down Sunday, leaving his official residence after a record five years in power overshadowed by worsening security and a weakening economy.

The 58-year-old widower of former prime minister Benazir Bhutto was treated to an honor guard from the armed forces and shook hands with staff before leaving the plush presidential palace. He was driven away in a black luxury saloon car from the sprawling residence at the foot of the lush green Margalla hills on the outskirts of Islamabad.

Never popular and always shrouded in controversy, Zardari—once jailed for years for alleged corruption—is now likely to split his time between Pakistan and Dubai. He retires six years after his wife’s murder, becoming the first elected president to complete a full term. His successor, Mamnoon Hussain, is to be sworn in on Monday.

A businessman and close ally of Prime Minister Nawaz Sharif, Hussain’s low-key persona and lack of personal power base will put him in stark contrast to Zardari.

Zardari, whose Pakistan Peoples Party suffered a humiliating electoral defeat to the Pakistan Muslim League (Nawaz) in May, said his party was still taking the “war for democracy” ahead. “Our mandate was stolen by the forces which want to destabilize Pakistan. But we accepted that mandate to strengthen democracy. We did not lose the war but have taken it ahead for the cause of democracy,” he said. “Now I have to fulfill your responsibilities, now I will meet workers, my sisters and brothers and will reorganize the party all across the country,” he said.

He also pledged support for Sharif in the battle for democracy.

“I want to tell Nawaz Sharif, we will not let you weaken. We will fight shoulder to shoulder with you against the forces which want politics of gun instead of the politics of ballot.”

Aides deny that Zardari, unpopular and divisive within the PPP, will spend most of his time abroad and insist he will concentrate on trying to revive the center-left party. The PPP ran a rudderless general election campaign and has been thrust into its greatest crisis, suffering a crushing electoral defeat without a Bhutto at its helm.