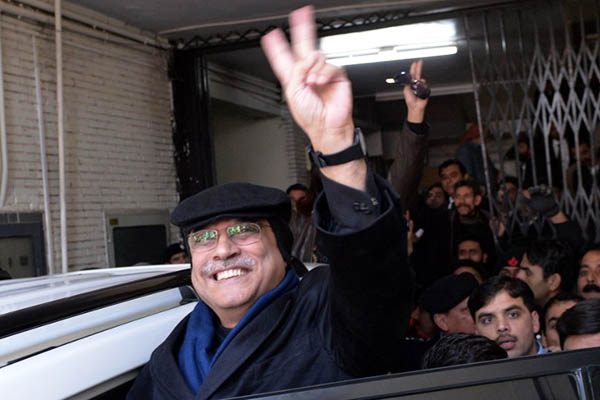 Former president appears before anti-corruption court to address graft allegations dating back to the 1990s.

Former president Asif Ali Zardari appeared before an anti-corruption court on Thursday over multi-million-dollar graft allegations dating back to the 1990s.

The cases against Zardari relate to kickbacks, money laundering and the illegal construction of a polo ground at the prime minister’s official residence during his slain wife Benazir Bhutto’s two stints as premier.

As president, Zardari enjoyed immunity from prosecution, but this ended when he stepped down in September last year after five years in office. After a brief session, the hearing was adjourned to Jan. 18.

Defense lawyer Amjad Iqbal Qureshi told reporters the evidence against the former president was flimsy. “He could not be indicted in the polo ground case because we argued that charges cannot be framed against him as there are no witnesses against him,” Qureshi said. “We hope that he will be acquitted in this and other cases as well.”

Dozens of supporters of Zardari’s Pakistan Peoples Party (PPP) greeted him at the court in Islamabad, chanting slogans and waving placards. His appearance came as his predecessor as president, Pervez Musharraf, faces trial for treason.

Another hearing was due in Musharraf’s case on Thursday but he has not yet appeared before the special tribunal due to security fears and ill health.

Zardari’s aides were keen to contrast his willingness to submit to the courts with what they see as the evasiveness of Musharraf—who many PPP supporters hold responsible for Bhutto’s assassination in 2007. “This is the difference between an elected civilian president and a military dictator,” said Zardari’s spokesman Senator Farhatullah Babar. “The civilian former president is appearing in court respecting its orders, while the military dictator is running away from court,” Babar added.

Zardari’s lawyer Farooq Naek said his client’s presence was necessary in the court to wrap up the cases as all of his co-accused have been acquitted or died.

The probe includes corruption allegations relating to customs contracts given to two Swiss companies that were behind a long-running tussle between the Supreme Court and the PPP-led government, which lost office in May’s general elections. For more than two years PPP ministers refused to write to the Swiss to ask them to reopen their probe into claims Zardari and Bhutto laundered $12 million worth of bribes. In June Swiss prosecutors refused to reopen the cases, saying no new evidence had emerged since they were dropped in 2008 and in any event the statute of limitations had expired.

Uhh what willingness by Zardari? He skipped the first two hearings due to ‘security concern.’ The only brave and honest leader is Imran Khan