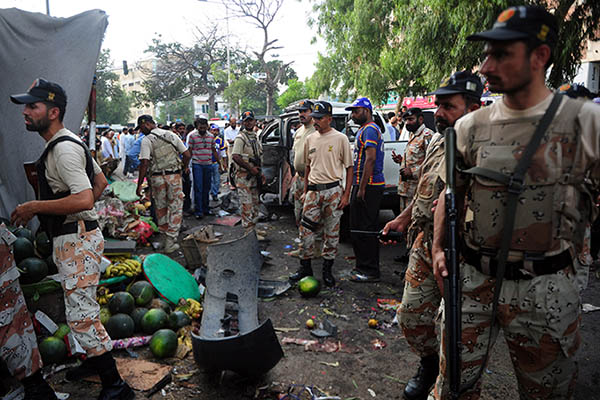 A suicide bomber killed a senior aide to President Asif Ali Zardari on Wednesday and at least two other people in Karachi, officials said.

The bomber blew himself up in the central Karachi neighborhood of Guru Mandir, close to an office for the Pakistan Peoples Party, which rules Sindh province. Zardari was at his private residence, Bilawal House in Clifton, around 10 kilometers away, when the attack happened, officials said.

“At least three people were killed and 10 others were wounded,” according to police official Tahir Naveed. He said the blast was so powerful it shattered the bulletproof vehicle in which Zardari’s top personal security officer in Karachi, Bilal Sheikh, had been travelling. Sheikh, his driver, and a passerby were killed.

Senior police official Omar Khatab added: “It was a suicide bombing. We have found small pieces of human flesh and some parts of [the] head of the suicide bomber. The bomb disposal staff has also confirmed the suicide bombing in which up to five kilograms of explosives were used.” The officer said that nobody had immediately claimed responsibility for the attack, but the pattern of the bombing indicated that it could be the work of Islamist militants.

Ejaz Durrani, spokesman for Bilawal House, said the president was in the city but had no schedule to travel on Wednesday. Instead, Sheikh and his driver had gone to buy food for the holy month of Ramzan. Sheikh had survived two previous attempts on his life, but had remained committed to the PPP cause, Durrani said.

Sheikh had been in charge of security for Zardari’s wife, former prime minister Benazir Bhutto, when she returned to Karachi from exile on Oct. 18, 2007. Bomb attacks targeting her homecoming killed around 140 people. Bhutto survived, but was assassinated by a gun-and-suicide attack on Dec. 27, 2007. Sheikh had also been in charge of Zardari’s private residence in Islamabad, and when Zardari became president in 2008, Sheikh was appointed his personal chief security officer, Durrani said.