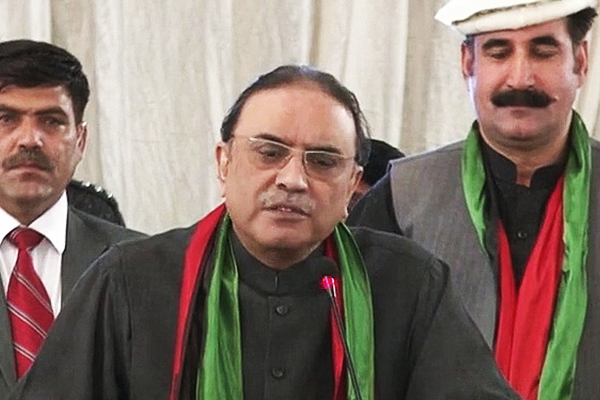 The former president’s outburst suggests his PPP might just have a lot to answer for.

Deterrence theory rests on many factors, one of which is signaling resolve—which must be backed by credibility for it to be effective. Put another way, the statements and/or actions that signal resolve also tend to increase the risk of conflict, and the cost of backing down from a deterrent threat. If an actor is bluffing, he shouldn’t cross a certain threshold. Because, once that threshold is crossed, he would be committing himself to a conflict he might not want, but in which he has got himself trapped. Nothing is worse than showing resolve without credible threat at one’s disposal, especially if the bluff is called.

In his speech in Islamabad on June 16, in response to the actions of the Rangers in Karachi, did former president Asif Ali Zardari just huff and puff and threaten to bring the house down? Given his (well-earned or otherwise) reputation as a sharp political player, it doesn’t seem that way.

But let’s first consider the context of Zardari’s speech and his signaling to the generals: Clean up Karachi by all means but don’t come near my Pakistan Peoples Party, ‘my PPP’ being the post-Benazir Bhutto party dominated by Zardari loyalists. Why? Because there’s honor among thieves; thieves are not supposed to compromise the activities of other thieves. That’s the gist of his speech and his attempt to signal threat. But while the alleged thievery or thieving of the generals remains a matter of some speculation as far as Karachi is concerned, by holding out the threat in the way that he has, Zardari has at least accepted, willy-nilly, that his party might just have a lot to answer for.

Proving charges in a court of law requires procedures, technicalities and much else. There are a lot of smart lawyers around to put everyone, including the concept of justice, in a Daedalian maze from where no one can find a way out. But snoop around, talk to people, go to Karachi and Sindh and see how the city and the province are being governed and one returns terribly disappointed with the performance of the PPP. And that performance is not just about the antiquated and rather comical chief minister of Sindh. He is just the rather brazen face of the party’s overall worldview.

Take the prodigal son, Bilawal. He is back but there is enough inside information with those who observe the scene to know the nature of his differences with his father and, yes, his aunt. Leaving aside his faux-Bhutto, high-pitched attempts at mesmerizing the audience at PPP rallies, as also his inexperience, he did—and does—realize that the party’s concept of (non)governance is hurting it badly and something must be done to stem the rot. He was punted off to cool his heels, reverse his modernity, and become one with Sindh’s quaint socioeconomic and political traditions—except, Sindh may be changing under the nose of the PPP.

So, Zardari believes that politicking is about making compromises and also chalking out areas of influence where every actor must be free to do as he pleases. The five years of the PPP are an example of Zardari’s politicking. Let the military do what it wants for itself and he should be free to do what he desires. If that means giving a full, three-year extension to the Army chief, so be it. It keeps everyone happy and it prevents people from stepping on each other’s toes.

Only, this time, at least in Karachi, that seems to be changing. The Rangers’ clean-up operation seems headed toward some serious, nonpartisan cleansing. That has Zardari worried, worried to the point, in fact, that he chose to speak aggressively and pointedly instead of keeping his usual cool. As he said himself, his patience has run thin.

What he has said about the generals is well-recorded.  The generals, at various times in this country’s history, have blundered and blundered terribly. Putting out a list of their misdemeanors and acts of omission and commission will merely add another document to the list of knowns. If Zardari can bring to the list some known unknowns, that will be of help to those of us who record such things. In fact, my suggestion would be that he should only focus on the five years that he was in power and reveal all the compromises he had to make to keep his own playing space intact.

And yet, that doesn’t solve his immediate problem. There is now a new set of generals and unless he can reveal their acts of misdemeanor, what they have set out to do cannot be faulted for what some other generals in the past have or might not have done.

Zardari finds himself in a bind. He could act meek or throw down the gauntlet. He has chosen to do the latter. But going by deterrence theory, if the threat he has signaled is not credible, or if he does not have the resources to climb further up the escalation ladder, then he might just have initiated a conflict he cannot sustain. He could rely on street agitation, but there are multiple other political actors who would like to see the PPP go down. That shrinks the space for Zardari.

If the Army picks up the gauntlet, it will have to show resolve, and resolve means not just taking on corrupt politicians but also corrupt generals and the entire incentives structure that has made the Army so top-heavy. Can the Army do that? Zardari thinks it can’t. His threat relies on the institutional incentive structure that is both the Army’s strength and its terrible weakness. The coming days will be interesting for sure.

Haider is editor of national-security affairs at Capital TV. He tweets @ejazhaider

I would also like to know from where did Zardari get the information he claims he has against the Generals. Despicable is this man and his cronies who claim to be the PPP.

Nothing will happen…Army is a group who cover each other…Claims of Hamid Gul, asghar khan case,case of royal palm country cub where billions gone ..etc..NS is wrong here

Dont you know what kind of journalist he is…let him bark among journalists he has no credibility at all.Just a tout.

Zardari just completed his full tenure as President of Pakistan, why didn’t he expose the generals during those five years? He was the one who gave Gen. Kayani and Gen. Pasha three extensions and escorted Gen. Musharraf out of this country with a guard of honor to enable him to escape accountability. If he has evidence against the generals and never revealed it during all those years, then he is also a partner in their crimes and should be duly punished right along with the generals.

The outburst from Zardari is nothing but an attempt to save himself and his party from Ranger’s operations.

In spite of the fact that the US, Israel and India are extremely unhappy with Pakistan Army and its leadership and they would be looking for someone to play their game in Pakistan, Zardari would still be a poor choice for international players. He himself has the problem of his own image nationally and internationally which is that of a small time thug who has plundered the country using different means through his cronies. He cannot think and act internationally unless he smells big money. https://passivevoices.wordpress.com/2015/06/17/lets-not-take-him-seriously/

Whatsoever Zardari said today about the Army Gens…is ugly bitter truth, but a dog like Zardari is saying this means, his tail is on fire…No letting up…down with corruption #GenRaheelisNotForSale

What Raja says is the truth. No one can deny the fact that anyone who’s had the chance, whether small or big has robbed the till, politicians, generals, bureaucrats, clergy, you name a class and it has has been there and made his pile while the sun shone. But then thieves also have grades and Z (his tribe would feel disgraced if I named him) is their king. Anyone who had a part has to be made to answer, no matter what rank, grade or appointment he held or carried. But known corrupt goons whom the world talks about need to be taken on first. And not that I distrust the judiciary but they should be the ones to say “you are guilty unless you prove your innocence.” The people I’ve spoken to since his outburst are waiting to see who will come out in answer to his call. Only a few of those who benefitted from his largesse because others wouldn’t like to sink with him and those few who are paid to come out. Now we have to wait and see

Ejaz Haider has got it right. The Army is good when it launches Zarb e Azb against home grown terrorists; it is good when there are floods in Punjab and Sindh; it is good when it does not interfere in the political feuds. But hold it there. It is not good when it launches a clean up operation in which the illegal fundraisers and gun trotters of prominent political parties are exposed and cost them defections among their traditional electorates; it is not good when the Rangers launch the operation in Sindh and not in other provinces; it is not good when not just the MQM but also the PPP are held responsible for the organised crime that rules Karachi. However, Ejaz Haider stops short of the conclusion. The conclusion to be drawn from this is that AAZ has panicked because he worries that PPP may not be able to measure up to MNL-N’s slow and steady performance this year — still undesirable but better than last year; that if PPP loses the next election, Bilawal may not become the next Prime Minister of Pakistan which is Daddy’s cherished dream; that playing the Sindh card will yet again consolidate the rank and file of PPP workers and make them stand firmly behind a party which is slowing disintegrating. The reason why this may not work this time is because it is not about civil-military power play; it is rather about uprooting corruption at the institutional and governance level which will have its repercussions in the military, state-funded corporations, all the four provinces and also at the centre. Expect more firepower in the future statements of paranoid leader once the money trafficking and money laundering cases reach courts.

The people of interior Sindh accepted this man in open arms even after the corruption the Zardari family was infamously known for in Karachi high society none the less he has done nothing but used those who gave him the benefit of the doubt and replaced them with illiterate yes men. Zardari is more concerned with pleasing his masters in the West than the citizens of Pakistan he has made a reputation for himself as a pseudo-mafioso and that is a contradictory to the ideals of the political party he represents. The only reason members of the PPP are elected to any political office whether it be provincial or federal is because of loyalty votes other than that they might as well be planning retirement. I also despise the Military as much as I do these parliamentary democrats through all the years of martial law the Pakistan Fauj has never paved the way for legitimate social and democratic institutions when they had the central command to do so they are no less corrupt than the feudal lords everyone seems to blame in fact the most legitimate lords are not even involved in politics they have sold their land a moved to the United Kingdom a very long time ago.