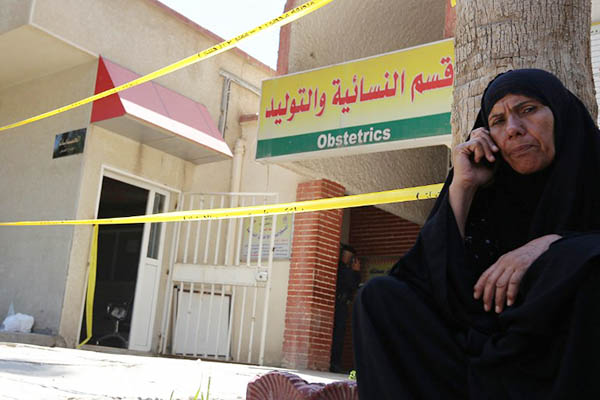 Iraq’s health minister resigns after the death of 12 newborns in fire caused by electrical fault.

A fire in the maternity ward of one of Baghdad’s main hospitals on Wednesday killed 12 premature babies, prompting Iraq’s health minister to announce her resignation. Only seven babies could be saved and were taken to another ward in the Iraqi capital, said Jassem Lateef al-Hijami of the Baghdad health directorate.

Health ministry spokesman Ahmed al-Rudeini said the blaze at the Yarmuk hospital in west Baghdad was started by an electrical fault just after midnight. “Twenty-nine women patients who were in the same ward were evacuated to other hospitals,” he told AFP.

Security services sealed off the area as forensic teams searched the gutted ward and angry relatives massed outside, waiting for information from the authorities. Officials and staff suggested the fire equipment was inadequate and Health Minister Adila Hamoud swiftly went on television to announce her resignation.

Charred incubators could be seen outside one of the entrances to the hospital, access to which was strictly controlled by the police. The grief of the bereaved parents and relatives was compounded by the fact that the babies’ young age and the effects of the fire made it very difficult to identify the bodies.

Umm Ahmed came to Yarmuk on Tuesday when a close relative of hers gave birth. The baby died in the inferno and the mother suffered burns, she said. “I am looking for our child, they told me ‘go find him in the fridge’,” said the middle-aged woman. “I found him in a small cardboard box but I’m not even sure if it’s our child or a piece of sponge. It looks like charcoal,” said the woman, wearing a black over-garment. “I just want our child, somebody give him to me,” she cried.

An official at Iraq’s interior ministry confirmed the death toll from the fire, adding that three other babies were being treated for smoke inhalation.

Many of Baghdad’s public hospitals are poorly maintained and offer sub-standard healthcare, forcing a number of Iraqis to seek private treatment or travel abroad. The lack of adequate public services, such as quality medical care, electricity and water supply, has angered the public and led to a series of protests in the past year.

“The hospital is very old and doesn’t have fire equipment,” Hijami said.

A member of Yarmuk hospital staff who asked not to be named said a “thorough investigation” had been launched into the tragedy.

The authorities were criticized in the aftermath of an attack in the Karrada district of Baghdad last month that killed at least 323 people. The truck bomb blast claimed by the Islamic State group sparked fires in shopping arcades on either side of the street that accounted for a significant proportion of the casualties. Witnesses complained that the fire brigade was unacceptably slow in responding to the emergency.