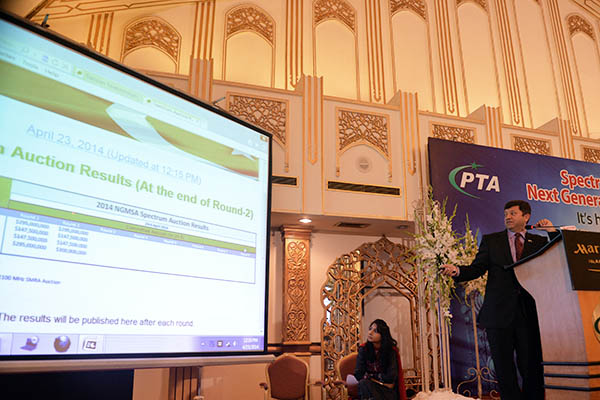 Telenor, Mobilink, Ufone and Zong have all won 3G licenses and are expected to introduce their service shortly.

Pakistan on Wednesday raised more than $1.1 billion in its long-delayed auction of next-generation telecommunications licenses, snapped up by four of the country’s existing mobile network providers.

The government sold off four licenses to provide 3G services, which allow broadband-speed Internet on mobile phones, and one for superfast 4G connections. The total is close to the $1.2 billion estimated for the sale in the federal budget for 2013-14 but below a bullish prediction of $2 billion made by Finance Minister Ishaq Dar in January.

The government of Prime Minister Nawaz Sharif was elected last year on a platform of boosting Pakistan’s floundering economy and ministers hope the license sale will bring a boost by improving communications.

Pakistan has more than 132 million mobile phone subscribers but has lagged behind its neighbors in setting up 3G, which is now the norm in many countries. Even Afghanistan, Pakistan’s far less developed western neighbor with a weaker economy and more fragile state, has had the technology since 2012.

The successful bidders for 3G services were Norway’s Telenor, Russian-owned Mobilink, Ufone, owned by the Pakistani government, and Zong—part of China Mobile. All four operators are already established players in the Pakistani mobile market. Zong also won one of two licenses available for 4G services. The second will be auctioned later.

Sikanadar Naqi, a Zong adviser, said the company would begin 3G services in the cities of Lahore and Karachi immediately.

The final bids for the 3G licenses totaled $902.82 million, while the 4G license went to Zong for the reserve price of $210 million. Dar said the government would receive half of the money up front and the rest in five annual installments.

The chief executive of Mobilink congratulated fellow bidders and the Pakistan Telecommunications Authority (PTA) on what he said had been a “transparent” process. “After this auction, not only 132 million subscribers but the whole Pakistani nation has taken the road of progress,” Rashid Khan said.

A study by the U.K.-based Plum consultancy in August last year said 3G could boost Pakistan’s GDP by between Rs. 380 billion and Rs. 1,180 billion by 2020. Up to 900,000 extra jobs could be created and between Rs. 23 billion and Rs. 70 billion in additional tax revenue generated by 3G, the Plum report said.

Cheap mobile phone telephony took Pakistan by storm in the early 2000s, but only 3.3 million people are signed up to broadband Internet, according to PTA figures, offering a huge, untapped market for faster web speeds.

State Minister for Information Technology Anusha Rehman hailed the auction as a boon for Pakistanis unable to afford computers and fixed-lined Internet connections. “Through this, cheap mobile phones of under-served people will become their computers,” she said.

Pakistan was old short on the auction of 3 G and 4 G licenses. Either the accountant turned Finance Minister calculated wrong estimates of Pricing or sold these licenses ata lower offerings.

It may not be a deliberate act, but he should have delayed the matter to get a better price. It was an accounting blunder which can be expected from him as he has no expertise as an economist. But the exchequer have suffered a great loss on this account. Some one should be accountable to the nation for this loss.