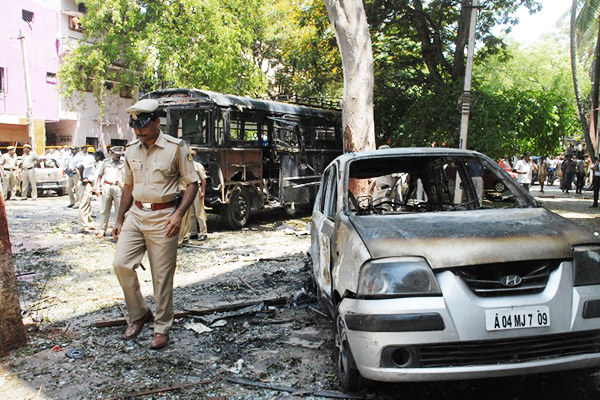 A top Indian official said a blast in the city of Bangalore that wounded 16 people on Wednesday, including 11 policemen, was “an act of terror” designed to disrupt upcoming state elections.

The explosion, which triggered panic among locals, appeared to have been planted on a motorbike near the office of the Bharatiya Janata Party, the main national opposition party which holds power in the southern state of Karnataka, police said.

“The incident is an act of terror,” R. Ashok, Karnataka’s home minister, told reporters as he appealed to people to “remain calm and peaceful.”

The explosion took place mid-morning in Malleshwaram, a part of the city referred to as “old Bangalore,” and destroyed several surrounding vehicles. It occurred a short distance from the BJP’s state office and opposite a Hindu temple.

“The fact it was so near our office clearly indicates the perpetrators wanted to cause damage to our party members, cause panic, and disrupt the forthcoming state election,” Ashok said.

India has made efforts to improve domestic security since the 2008 Mumbai attacks, in which 10 Islamist gunmen laid siege to the city, killing 166 people. But experts say security forces still suffer from weak grassroots intelligence gathering.

Karnataka’s director-general of police, Lalrokhuma Pachau, said the nature of the explosion needed to be investigated further as authorities still “do not know the type of material or bomb used for the blast.”

There were no claims of responsibility, police said.

The state-run National Investigation Agency and forensic experts are “studying the explosion,” said Pachau. None of the 16 injured, who included 11 policemen, was wounded seriously, he added.

The policemen who were injured had been sitting in a mini-bus parked near the motorcycle. They were on security duty for the Karnataka legislative assembly elections to be held May 5, for which candidates’ nominations were due to close Wednesday.

Initially, police said it was a gas cylinder blast but later said they believed an explosive had been used. Security experts have warned that Bangalore has increasingly become vulnerable to attacks with a number of groups with militant ties believed to have based themselves in the city.

In February, 16 people were killed and 117 people wounded in twin bombings in the southern Indian city of Hyderabad, which is also a major hub of India’s flagship software industry. The bombs were planted on two bicycles near a crowded market.

The Hyderabad blast was the first major bomb attack in India since a powerful bomb hidden in a briefcase ripped through a crowd outside New Delhi’s High Court in September 2011, killing 11 people and injuring 66.