A Day of Reckoning 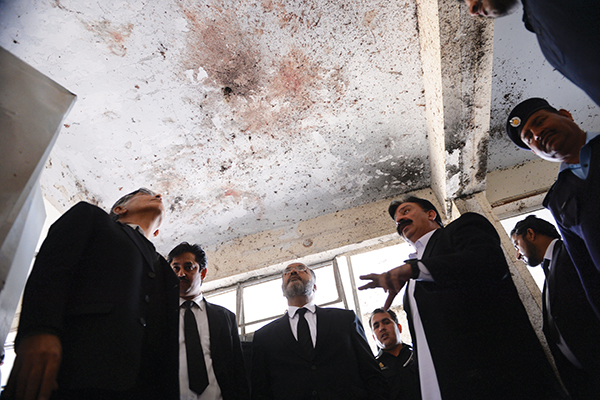 On March 3, two days after the Tehreek-e-Taliban Pakistan announced a ceasefire aimed at restarting stalled peace talks with Islamabad, some six to eight men attacked the district courts in the capital, killing 11—including Judge Malik Rafaqat Awan, who was known for his liberal worldview—and injuring 29 others. The brazen 9 a.m. gun-and-bomb attack jolted the 140,000-strong community of Pakistani lawyers which has lurched increasingly rightward since their draw-blood days during the Musharraf era. The Taliban disowned and condemned the attack, which was claimed by Ahrar-ul-Hind, an apparent offshoot of the militant group. Right on cue, Imran Khan appeared to suggest that the attack may have been carried out by the U.S. to foil truce talks. Chaudhry Nisar Ali Khan, the interior minister, said the attack could have been in retaliation over the arrests of suspected militants some days earlier. He asked the Taliban to help identify the perpetrators. For the legal community, which shockingly hailed Gov. Salmaan Taseer’s assassin as an icon of justice, the attack should prompt some rethinking. But it is more likely that it won’t.