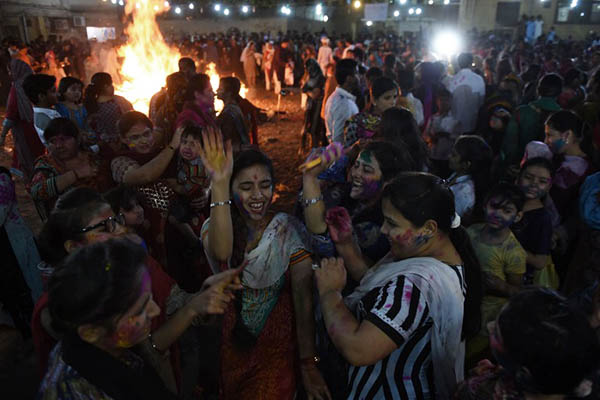 The Constitution will never be amended to accommodate Pakistan’s minorities, but it’s the thought that counts.

Celebrating holi with the Hindu community of Umerkot, Sindh, on March 24, Bilawal Bhutto Zardari called for changes to the law that would allow a non-Muslim to be elected to the highest office in the country. Generally speaking, the chairman of the Sindh-ruling Pakistan Peoples Party is not alone. Others, including Prime Minister Nawaz Sharif, have also recently expressed solidarity with Pakistan’s minorities—in sharp contrast to the troubles next door, where the rightwing Bharatiya Janata Party is coming down hard on India’s protesting minorities.

There is a change coming over Pakistan, but don’t hold your breath for a non-Muslim to be elected president or prime minister in our lifetimes.

Zardari’s social liberal and socialist grandfather Zulfikar Ali Bhutto framed the 1973 Constitution of the Islamic Republic of Pakistan, which prohibits a non-Muslim from becoming either president (“A person shall not be qualified for election as president unless he is a Muslim”) or prime minister (“the National Assembly shall … proceed to elect without debate one of its Muslim members to be the prime minister”) and which also excommunicated and apostatized Ahmadis. Politico-religious parties, gasping for relevance in the Pakistan of Operation Zarb-e-Azb, reprimanded the 27-year-old for flouting his grandfather’s legacy and aping the example of Hindu-majority India, which has had four Muslim presidents.

In India, the success of its Muslims—in politics, business, Bollywood—has largely been seen and presented as the triumph of an Indian identity, transcending religious sub-identities. But the ascendance, affluence and acclaim of successful Indian Muslims have a greater symbolic purpose: it takes the air out of the whole Pakistan Movement; Indian Muslims, it seems to prove, did not need to migrate to the Muslims-only state of Pakistan, carved out of India, to move up in the world. Unfortunately, championing minorities in Pakistan beyond a certain point is also widely viewed as a rebuke to the Pakistan Movement.

Pakistani minorities remain an afterthought today because they pose no challenge to the state. They are not economically empowered enough or demographically strong enough to elicit any sustained cultivation from political parties. In early Pakistan, the Ahmadis, many of them legendarily competent, were deeply entrenched in the bureaucracy. This “problem” was taken care of when they were declared “non-Muslims.”

The recent awakening of the political classes to the plight of Pakistani minorities—targeted by terrorists and the law itself—is not conscience catching up. Their right sounds (couched in human rights, not religious, terms) have a political purpose: to claw space back from the rightwing by capitalizing on the anti-extremism sentiment being studiously fostered by the Army. This defiance has an unmistakable air of expedience to it. But that’s absolutely okay.

Religious minorities in Pakistan are living under shade of indignity & humiliations. Religion which carved out Pakistan adhered to parochialism & intolerance towards religious faiths leaving little space to marginalised minorities. Love your fellow citizens otherwise they will be history like in many Islamic lands. Celebration of Hindu festival Holi is a good beginning. God bless.