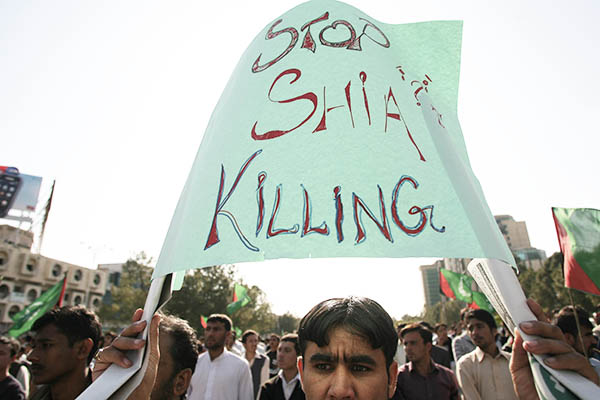 Behind the shared history of destabilization and sectarian divisions in Afghanistan, Pakistan, Iran and Iraq

“Shaped by different legacies, the modern states of Afghanistan, Pakistan, Iran and Iraq nevertheless retain many similar characteristics as a result of their common historical heritage and experiences. All four are defined by the mosaic composition of their societies, which are made up of various ethnic, tribal, linguistic, sectarian and cultural units. Their territorial boundaries have often been shaped by Western influence, with the result that their social entities or micro-societies frequently straddle national lines and retain cross-border ties with neighboring populations. Tribal, clan, family and sectarian divisions remain prominent, especially along the Afghanistan-Pakistan border, and in both countries the ethnic cleavage continues to spill over into the political realm.”

Out of the four, Afghanistan and Iraq are hardly states any more. The world has fought its wars there and left behind territories that are barely recognizable. But the two share some characteristics: both had communities of different confession and sect and had been subjected to tolerable governance only under tyranny. Iran and Pakistan were more homogenous, one living under kingship, the other compelled to democratic rule through a British Raj conditioning. Ironically, kingship in Iran was able to allow more pluralism that disappeared when a people’s revolution made it an Islamic republic. In Pakistan, the revival of “ideology” gradually killed its borrowed pluralist conditioning and actually started presaging the “revolution” in Iran. Iran has purged its minorities; Pakistan is keeping them under pressure.

Sectarian divisions undermine all four states. Iraq, an ancient cradle of many religions, has more diversity than its intellectuals could deal with. Ancient communities with few external links have suffered in Iraq but the Shia-Sunni divide has stopped normal evolution of the state. Under “minority” Sunni dictatorship, it was more “secular” but under Shia “majority” rule—and living next to a powerful Shia monolith—it has damaged itself more. In Iran and Pakistan, the best years were spent under a king or martial law, while life lived under representative governance has been of poor quality. Iran as a Shia state is not able to treat its minorities well; Pakistan as a Sunni state has allowed its minorities to be maltreated despite its democratic Constitution.

Iraq looked stable under military dictatorship; Afghanistan looked stable under monarchy. This characteristic they shared with Iran under monarchy. It is moot when these countries violated human rights more: under dictators and kings or under “ideological” democracy. Pakistan, out of the four, had a better chance of evolving as a normal 20th century state, but its gravitation to untried but divinely inspired rules of governance pushed it toward anarchy. Unlike Iran, it doesn’t want to persecute the Shia—that is something it has permitted its “non-state actors” to accomplish—while Iran under the rule of the ayatollahs was more up-front with regard to Sunnis and Bahais. Democracy in all four states delivers what the textbooks of political science simply can’t accept: it has facilitated oppression of identities that a normal democracy would be accepted to tolerate and protect.

Pakistan and Afghanistan have been destabilized through “shared” populations. Half of Afghanistan comprises Uzbek- and Persian-speaking non-Pashtun who can communicate more easily with the neighboring states. That holds true of the sects that are often directly and indirectly persecuted under Islam. Pakistan has a Pashtun population that it shares with Afghanistan. While they are governed as a minority ethnicity in Pakistan, they remain the “resented” dominant community in Afghanistan. While troubled inside Pakistan because of their perceived tribal backwardness, malefactors can destabilize it by with participation in the ethnic conflicts of neighboring Afghanistan. In its evolution, Pakistan has unthinkingly allowed its Pashtuns to live outside normal governance, which has allowed them to seek cross-border self-identification. Afghanistan suffers under the double-whammy of having its Persian-speaking Sunni Tajiks and Shia Hazaras seeking identification with Iran.

Iran, living next to oil-rich Arab states, also suffers from some of the same consequences suffered by Pakistan situated next to India. The Shia in Saudi Arabia suffer persecution while in the Gulf States they survive by hiding their identity under the doctrine of taqiyya of their 6th Imam, Jafar Sadiq. Pakistan’s jihad against India—through non-state actors—was spearheaded by its Pashtun minority, while the Afghan jihad backed by its madrassas brought in influence from the Gulf Arabs. Pakistan’s governance and identity as a modern state has been undermined by the nexus its Pashtuns developed with Afghanistan on the one hand, and Arab terrorist organizations like Al Qaeda and Islamic State on the other. Today, Pakistan has an important stake in peace in Afghanistan but its international status is negatively impacted because of its influence with Afghan-Pashtun warriors.

Out of the four states, Pakistan has fought many wars without winning them—in one, which ended in defeat, it was actually broken asunder—but its importance for an international community trying to end the war in Afghanistan hinges on its ability to become a spoiler. It nursed the most powerful Afghan militia, the Haqqani Network, in Waziristan at the cost of the sociology of its own tribal communities. Through the Haqqani Network, it also gained the assistance of the Gulf Arabs, into whose aristocracy many Network warriors had married. Today, Pakistan’s leverage in Afghanistan depends on its influence with the Haqqanis.

Democracy has not survived well in Pakistan, as it has focused on war on top of a malfunctioning economy. Iran has practiced the same sort of cross-border strategy of interference but has survived better than Pakistan because of its despotic governance. Pakistan is expressing fears growing out of its 70 years of cross-border preoccupation as it wire-fences the Durand Line, but feels the consequences of its past conduct just like Iran to its westward states.