Home Lightbox A Short History of the Cricket World Cup

A Short History of the Cricket World Cup 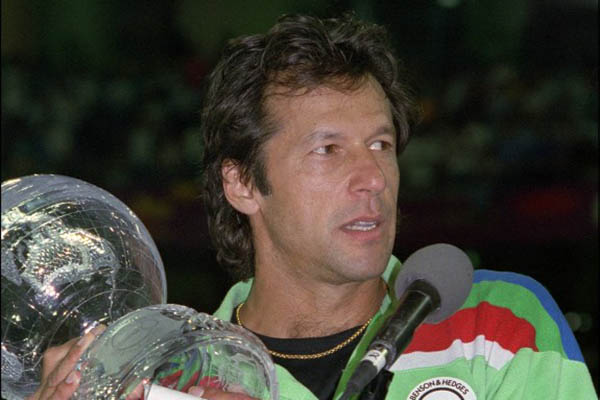 From 1975 through today, the tournament has a history of delivering shocks and surprises

The Cricket World Cup starts in England on Thursday with 10 teams vying to be crowned champions in the 12th edition of the tournament. AFP Sports takes a look back at the history of one-day showpiece.

A West Indies side including several players who had experience of limited-overs competitions in county cricket swept all before them in England before beating Australia in the final at a sun-drenched Lord’s. Clive Lloyd, the West Indies captain, led from the front with a brilliant 102 and despite a rearguard action from Australia, the Caribbean side completed a 17-run victory.

West Indies were arguably even more formidable than four years previously, with the Caribbean side fielding a fast-bowling attack of Andy Roberts, Michael Holding, Joel Garner and Colin Croft. Viv Richards made a commanding 138 in the final against hosts England, although it was Collis King who initially upped the tempo with a blistering 86.

Few were betting against Lloyd’s men making it three in a row ahead of the 1983 World Cup and even fewer would have backed India to be the side to dethrone them. India had beaten the West Indies in a group game but their chance of victory in a Lord’s final seemed to have disappeared when they were dismissed for just 183.

But captain Kapil Dev made the decisive contribution when he held a brilliant catch to dismiss Richards and send the West Indies spiraling to a 43-run defeat.

The first World Cup in the subcontinent looked like it could produce an India-Pakistan final but instead this edition saw Australia vanquishing arch-rivals England by seven runs in the final at Kolkata’s Eden Gardens. England appeared to be on course to reach a target of 254 until captain Mike Gatting tried to reverse sweep Australia captain Allan Border, an occasional spinner, only to give wicket-keeper Greg Dyer a simple catch.

A World Cup in Australia and New Zealand marked the first appearance in the competition of South Africa after decades of apartheid-enforced isolation.

Pakistan, who had been on the brink of elimination, rode their luck before finding their form late on under the inspirational captaincy of Imran Khan, who had urged his players to “fight like cornered tigers.” All-rounder Khan top-scored for Pakistan in the final with 72 in a total of 249 for six against England, who were dismissed for 227.

Sri Lanka changed the face of the of the game even before they won this World Cup as openers Sanath Jayasuriya and Romesh Kaluwitharana capitalized on fielding restrictions with their aggressive strokeplay. But the tournament was also notable for boycotts and riots, Sri Lanka winning two matches without bowling a ball when both Australia and West Indies refused to play on the island because of security concerns.

In the final, Sri Lanka held Australia to a total of 241 and Aravinda de Silva hit a superb century as his side won by seven wickets.

Australia came through several tense matches to win a second World Cup as hosts England exited early. Australia met South Africa in a semi-final that ended in a remarkable tie when South Africa’s Allan Donald was run out with two balls remaining. The result meant Australia went through to the final because of their better net run-rate in the Super Six.

The final was a let-down as a contest, with Australia thrashing Pakistan by eight wickets at Lord’s as leg-spin great Shane Warne took four wickets.

Australia suffered a setback on the eve of the tournament when it was announced that Warne had failed a drugs test but they were so strong that his absence made little difference.

Main hosts South Africa suffered yet more heartache when they bowed out in bizarre fashion during a rain-hit match against Sri Lanka. They thought they had won but in fact they needed one more run by the time the match was stopped. The final at Johannesburg’s Wanderers ground was dominated by Ponting’s majestic unbeaten 140 as Australia beat India by 125 runs.

The tournament was overshadowed by the death of Pakistan coach Bob Woolmer. India made an early exit during a tournament at which Australia were rarely challenged. Nothing summed up their dominance quite like Adam Gilchrist’s dashing hundred during the final against Sri Lanka in Barbados.

As the tournament returned to the subcontinent, the question on the minds of many India fans was: Could Sachin Tendulkar win the World Cup at the sixth time of asking? India beat Australia in the quarter-finals and Pakistan in the semi-finals.

The final was played at the Wankhede Stadium in Mumbai, Tendulkar’s home ground. Sri Lanka’s Mahela Jayawardene scored a majestic hundred in a total of 274 and there were gasps when Tendulkar, the World Cup’s all-time leading run-scorer, was out for just 18.

But Gautam Gambhir’s composed 97 and a captain’s innings of 91 not out from M.S. Dhoni, that ended with a straight six, saw India to a six-wicket win.

A tournament staged in Australia and New Zealand saw both co-hosts make it into the final. Australia had made their intentions clear from the start with a 111-run thrashing of England.

New Zealand’s bold play won them many admirers but a total of 183 in the final never looked like winning a final and their near-neighbors cantered to victory by seven wickets.

Who do you think will win between India vs SA on Wednesday?

You still know about our work. Our cricket match prediction is absolutely accurate. B similar prediction in upcoming Big Bash match

Pakistan is number one t20 side in the world

Why don’t we arrange the World Cup of main teams of every domestic T20 team like Chennai Super Kings from India, Melbourne Renegades from Big Bash and Multan Sultans from PSL. It would be a superb idea, what do you say Guys??

I think something is missing in the history

In 1975 the first Cricket World Cup was contested in England as a series of one-day matches of 60 overs per side. It was held outside England, in India and Pakistan, for the first time in 1987. The 1987 contest also saw the number of overs per side reduced to 50. In 2007 Australia became the first team to win three consecutive World Cup tournaments.