Home Culture A Touch of Class

A Touch of Class 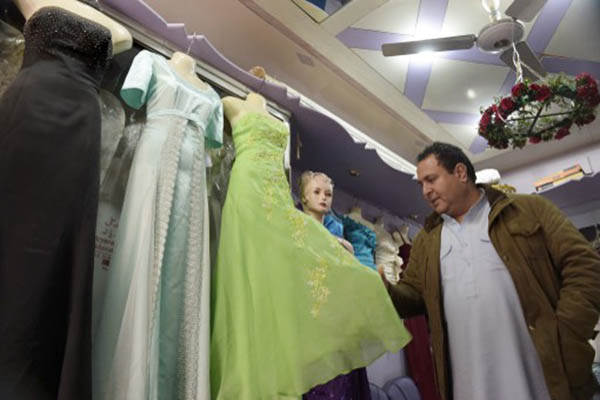 Afghan tailors are carving out a niche for themselves in Pakistan.

With ball-gowns, Western-style bridal wear and cocktail dresses, Afghan tailors driven out of their homeland by the Taliban are carving a niche for themselves in Islamabad.

Their stores stand between rows of animal carcasses and car workshops in Islamabad’s grubby Peshawar Mor neighborhood—known more as a haven for refugees than a home for glamour. In Pakistan, dresses are normally the preserve of a tiny liberal elite, with most women more likely to be seen in public wearing the traditional shalwar kameez.

Raza Sakhi, a portly 43-year-old of ethnic Tajik heritage who fled Afghanistan when it came under control of the hardline Taliban, said those trends are now slowly changing in Pakistan. “I shifted to Pakistan in 1996. I have been here now 19 years. I sell bridal dresses and maxi dresses,” he says, sitting behind a row of mannequins. “Earlier, more of our customers were Afghan, Iranian, Egyptians and so on. Now Pakistani sisters are buying our dresses too, around 30 percent of our customers are Pakistani and we’re very proud of that.”

For Afghans who grew up under the rule of King Zahir Shah, the attire he creates represents a way of life that is now a distant memory. “I became a dressmaker after leaving school, because I was always interested in this,” explained Shir Rahim Salimi. He added that his pieces followed the old ‘Afghan style’—a mix of traditional and Western-styles favored in the 1960s and 1970s.

Pre-Taliban Afghanistan was starkly different to the deeply conservative, conflict-torn country of today—bright blouses and even mini-skirts were the order of the day among fashion-conscious citizens of Kabul. The country saw a period of upheaval starting in 1979 when the Soviet Union invaded and violent resistance by the mujahideen, religiously indoctrinated fighters backed by the United States, began.

After the Soviets left, Afghanistan was plunged into bitter civil war, with the Taliban finally emerging to take control in 1996 and impose a harsh interpretation of sharia law that forced women to remain at home and beheaded criminals in public.

Sakhi said he kept a small shop in Kabul’s posh Wazir Akbar Khan district until 1996, and tried to keep it going even under Taliban rule. “I was forced to keep a beard down to here,” he laughs, pointing towards his chest. “We worked under the Taliban in Afghanistan for one year. They saw our catalogue one day and then arrested me for a day. Then they let me go and told me to stop making these designs.” It was then that he decided to heed their warnings and moved to Islamabad.

Others like Morid Khawas, 55, have had a less straightforward route to the business. The former Dari literature lecturer took a series of manual labor jobs after leaving Afghanistan for Pakistan, before finally deciding to make dresses. “I had no choice because there is no market for Dari lecturers here,” he said.

Many of his customers are Pakistani Christians, who make up roughly five percent of the population in the Punjab region, but he also rents out his pieces to artist and performers working in theater and TV, he said. Dresses generally range from $50 to $1,000, with the lower end of the scale affordable for Pakistan’s middle class customers.

There are an estimated three million Afghan refugees living in Pakistan either officially or unofficially, most of whom left their country to escape conflict in the 1980s and 1990s. They have little desire to return to Afghanistan, which despite last year’s election of President Ashraf Ghani to power, remains politically unstable and still faces an array of daunting problems, including a fierce and resilient Taliban insurgency, widespread corruption, poverty and growing unemployment among the country’s 30 million population.

Yet the dressmakers and their fellow refugees are viewed with deep suspicion inside Pakistan and are routinely accused by authorities of harboring militants. Those suspicions have sharpened in the aftermath of a deadly Taliban massacre at a school in Peshawar in December, leading to an exodus of more than 30,000 Afghans since the start of the year—most of their own volition.

“If the government of Pakistan decides to throw out Afghans then obviously we’ll be forced to pack up and leave since we are also Afghan,” said Sakhi.