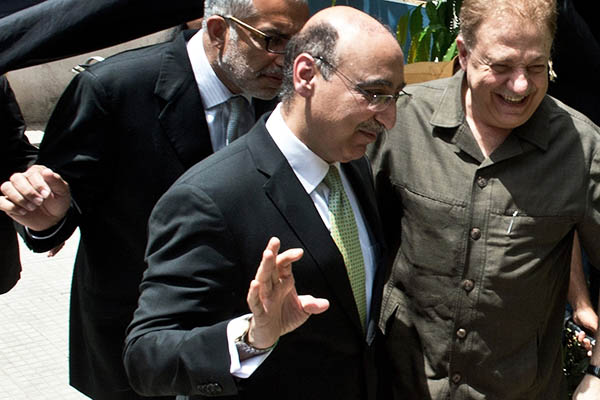 Pakistan’s high commissioner to India says he believes the setback of cancelled talks can be overcome.

Pakistan’s top envoy to India on Wednesday defended his decision to meet Kashmiri separatists, a move that prompted an angry New Delhi to cancel high-level talks between the neighbors.

High Commissioner Abdul Basit said he met Kashmiri separatist leaders as part of efforts to resolve tensions between the two countries, including over the disputed Himalayan region.

Delhi’s decision to call off talks between foreign secretaries, which had been scheduled next week in Islamabad, was a blow to hopes of warmer ties between the new Indian government and Islamabad. “We believe Kashmiris are a stakeholder in this [diplomatic] process,” Basit told reporters in the capital, saying meetings with the leaders were a “longstanding” practice.

Indian foreign ministry spokesman Syed Akbaruddin later hit back on Twitter, saying there were only two stakeholders in the Kashmir issue, “India & Pakistan. None else.” Akbaruddin on Monday said Pakistan’s decision to meet the leaders was an interference in Indian domestic affairs.

Basit also told reporters on Wednesday Pakistan was confident of “overcoming this setback” on the cancelled talks. “We will not allow the process [of stronger ties] to be distracted in any way,” Basit said, adding, “You will find Pakistan seriously committed to the process.”

Indian Prime Minister Narendra Modi’s surprise move to invite his Pakistani counterpart Nawaz Sharif to his swearing-in ceremony in May spurred hopes that peace talks between the two countries could resume. But last week Modi accused Islamabad of waging a “proxy war” by sending militants to attack Indian targets.

There have also been several ceasefire violations across the Kashmiri border, which have angered India.

India and Pakistan have fought three wars since independence, two of them over the disputed Kashmir region. The United States earlier this week termed the cancellation of the talks disappointing.

How do you explain– Pak forcing UN to delete J& K people name and keeping only India & Pak as stake holders in UN resolution 1952—As per UN resolution not vacating POK , gilgit , baltistan of all its personnel — converting J&K part Gilgit , baltistan as its Riyasat– Handing over part J&K to China. Forcing POK assembly reps to sign 2 nation theory , suzeranity of pakistan . –Not treating BALOCHISTAN on the same scale ie self determination.– Forcing the issue through 1947 , 1965 , Kargil wars and mucking the issue through Pak grown terrorists– Killing thousands of populace through proxy war-
Relentlessly Subverting economy of POK by hijacking its vital resources since 1950.
Claiming champion of Islam when Indian Muslims outnumber Pak in nos. This increase is not due to muslim frustration in India. Brazenly hobnobing with proxy war elements/ separatists in Indian capital– opening the options for Balochistan , India dialogue.