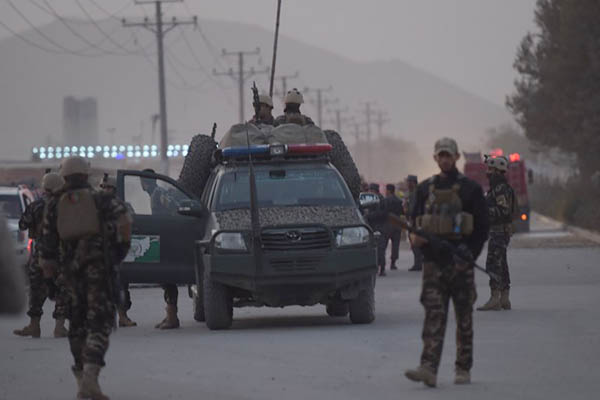 Suicide bombing targeted trainees heading home from base in Kabul

A suicide bomber killed 15 Afghan army trainees as they traveled home from their base in Kabul on Saturday, officials said, as militants intensify a deadly rampage that has claimed more than 200 lives this week.

It was the second suicide bombing in the Afghan capital in 24 hours and the seventh major assault in Afghanistan since Tuesday, capping one of the bloodiest weeks in the war-weary country in recent memory. The latest attack comes after a suicide bomber blew himself up in a Shia mosque during evening prayers in Kabul on Friday, killing 56 people and wounding 55 others in an assault claimed by the Islamic State group.

In an email to journalists the Taliban said it was responsible for the ambush on the army cadets, taking to five the number of attacks on police and military bases this week that involved the insurgents. “This afternoon when a minibus carrying army cadets was coming out of the military academy, a suicide bomber on foot targeted them, martyring 15 and wounding four,” said defense ministry spokesman Dawlat Waziri.

Kabul Crime Branch chief General Mohammad Salim Almas said police have launched an investigation into the attack which happened in the west of the city. “The minibus was carrying army trainees to their homes from Marshal Fahim military academy,” Almas told AFP. Security forces blocked the road leading to the scene of the attack as firefighters hosed down the asphalt.

The spate of deadly attacks underscores deteriorating security across Afghanistan as the resurgent Taliban step up their assaults on security installations to devastating effect and the Islamic State group targets Shia mosques. NATO’s Resolute Support mission in Afghanistan tweeted that the assault on the army trainees was an “attack on the future” of the country and its security forces.

“This attack in #Kabul shows the insurgents are desperate and cannot win” against Afghanistan’s security and defense forces, it said.

It was the fifth time since Tuesday that the Taliban have launched a major attack against Afghanistan’s beleaguered security forces, which are already badly demoralized by high casualties and desertions. In the deadliest of the recent attacks, around 50 Afghan soldiers were killed in an assault on a military base in the southern province of Kandahar on Thursday.

Insurgents blasted their way into the compound using at least one explosives-laden Humvee—a tactic used in three separate attacks this week—officials said.

The militants then razed the base in the Chashmo area of Maiwand district to the ground, according to the defense ministry.

On the same day Taliban militants besieged a police headquarters in the southeastern province of Ghazni, attacking it for the second time this week.

Afghan security forces have faced soaring casualties in their attempts to hold back the insurgents since NATO combat forces pulled out of the country at the end of 2014. Casualties leapt by 35 percent in 2016, with 6,800 soldiers and police killed, according to U.S. watchdog SIGAR.

The insurgents have carried out more complex attacks against security forces in 2017, with SIGAR describing troop casualties in the early part of the year as “shockingly high.” The attacks included assaults on a military hospital in Kabul in March, which may have killed up to 100 people, and on a base in Mazar-i-Sharif in April, which left 144 people dead.