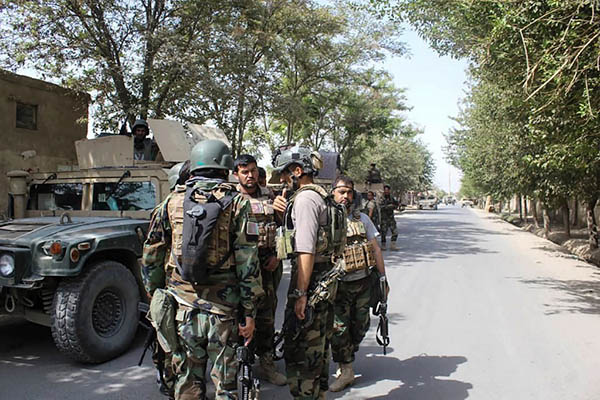 Afghan security forces appeared to have cleared Kunduz of Taliban fighters on Sunday, a day after insurgents tried to repeat a 2015 takeover of the northern Afghanistan city.

Fighting also broke out Sunday in Pul-e Khumri, the capital of neighboring Baghlan province, but officials said the situation was “under control.”

The Taliban launched a multi-fronted attack on Kunduz early Saturday, but were eventually repelled after heavy fighting that included U.S. air support.

The fighting comes as U.S. and insurgent negotiators were seeking an agreement in Doha that would see thousands of American troops leave Afghanistan in return for security guarantees. Kunduz had been “completely cleared” of Taliban fighters by Sunday afternoon, the interior ministry said in a statement, noting that 56 “terrorists” had been killed.

The ministry said 20 Afghan security forces had been killed along with five civilians. Another 85 civilians were wounded, officials said.

In one incident, a suicide bomber blew himself up while police spokesman Sayed Sarwar Hussaini was speaking to reporters. Hussaini, who had livestreamed himself earlier in the day from the same spot, was killed along with about 10 others. He was widely respected in the city and had been an outspoken Taliban critic. It was not clear if any journalists were among the victims.

In late September 2015, the Taliban attacked Kunduz, overwhelming local forces and briefly seizing the city. It was only through extensive U.S. air support that the Taliban were repelled. The event garnered particular global attention after a U.S. gunship struck a hospital run by Medecins Sans Frontieres (Doctors Without Borders), killing dozens of patients and staff.

The fall of Kunduz also underscored the vulnerability of Afghan security forces and played a role in stopping the pullout of U.S. forces under then-president Barack Obama. Since then the city has come under frequent Taliban attack, but the insurgents have been unable to pull off a full capture.

Early Sunday morning, Washington’s special envoy to Afghanistan Zalmay Khalilzad said the two foes were on the brink of a deal. “We are at the threshold of an agreement that will reduce violence and open the door for Afghans to sit together to negotiate an honorable and sustainable peace,” Khalilzad said on Twitter. He was due to arrive in Kabul later Sunday.