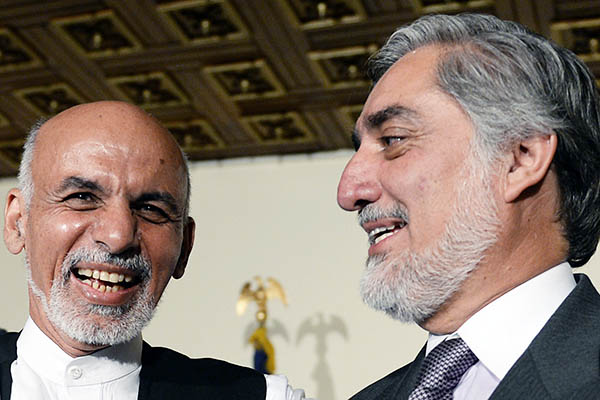 Ashraf Ghani and Abdullah Abdullah will visit NATO headquarters and attend a donor conference in London.

Afghanistan’s new leaders head to Europe on Monday to showcase their plans to foster peace and revive the economy, but a spate of Taliban attacks threatens to overshadow their optimistic message.

President Ashraf Ghani and chief executive officer Abdullah Abdullah will visit NATO headquarters in Brussels and attend a donor conference in London in a public show of unity after they signed a power-sharing deal in September.

Afghanistan faces serious challenges including a fragile economy, declining aid funds and a worsening Taliban insurgency as the U.S.-led NATO force wraps up its 13-year war against the militants at the end of this year. The “national unity government” has struggled to get off the ground, with no ministers yet confirmed two months after Ghani was inaugurated.

In Brussels, the two Afghan leaders will meet NATO Secretary General Jens Stoltenberg on Monday and attend a meeting of NATO foreign ministers on Tuesday. Hamid Karzai, president from 2001-2014, had a troubled relationship with the NATO coalition, but Ghani has tried to reset ties.

“When we have meetings with NATO, we will talk with confidence about the future,” Ghani said on Sunday. “There is no more suspicion between Afghanistan, NATO and the U.S.”

Much of the fighting has been taken over by Afghanistan’s hard-pressed army and police, and NATO troops will be restricted next year to “training, advising and assisting” the local security forces.

The Taliban have marked the final weeks of NATO’s war with high-profile attacks in Kabul on foreign compounds, guesthouses, U.S. convoys and a suicide strike on British embassy car that killed six, including a British bodyguard.

On Saturday, a South African father running an education charity and his two teenage children were killed at their home in the city after three militants stormed the building. Kabul has been hit by at least nine attacks in the last two weeks.

“The insurgents’ goal is to show that the new government is weaker and to kill people’s optimism in the future,” interior ministry spokesman Sediq Sediqqi said Sunday.

British ambassador Richard Stagg told AFP that the London conference is a chance for Ghani and Abdullah to present themselves on the world stage as a force for change in Afghanistan. “The conference is an important opportunity for the Afghan government to set out its vision for reform, and for the international community to re-confirm our long-term partnership with Afghanistan,” Stagg said.

President Ashraf Ghani used his inauguration speech to call on the Taliban to join a peace process, but substantive talks look unlikely in the near future. Karzai opened preliminary contacts with the insurgents but they collapsed acrimoniously last year.

NATO is keen to underline its achievements in Afghanistan after billions of dollars of military spending and the death of over 3,400 NATO soldiers, most of them from the U.S., since 2001. “Afghanistan is no longer a safe haven for international terrorists and is more secure thanks to 350,000 soldiers and police who are ready to take full security responsibility,” said Chris Chambers, the NATO spokesman in Afghanistan.

Abdul Hadi Khalid, an analyst and former deputy interior minister, said that international military support and financial backing are essential if Afghanistan is to avoid a Taliban resurgence. “The Taliban have already started to show their teeth,” he said. “But the international community has given assurances and they will emphasize their commitments again in London and Brussels. The Taliban consider the withdrawal of foreign forces as a chance for them to win. The lack of government appointments also contributes to insecurity,” he added. “The remnants of Karzai’s government and those who don’t see themselves in the new administration no longer care.”

The London Conference on Afghanistan is on Thursday, with sideline events starting Wednesday.