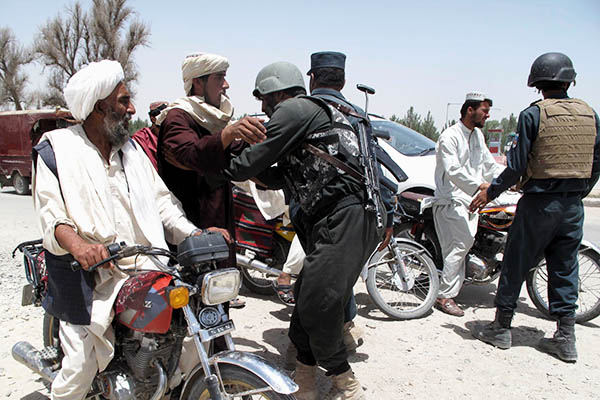 Counter-offensive aims to defeat at least 800 militants who have targeted several southern districts for the past five days.

The Taliban’s drive into Helmand province is the biggest test of Afghan security forces so far in the current summer “fighting season” and comes as the government is locked in a stalemate over the presidential election. NATO’s combat mission winds down by the end of this year, and Afghanistan’s army and police are fighting against the Taliban with decreasing support from the U.S.-led military coalition.

At least 800 Taliban fighters launched the offensive centered on Sangin district, a hotbed of opium production and intense fighting during the 13-year insurgency. “We have been reinforcing our forces in Sangin in the past 72 hours especially in those areas where the Taliban launched their attacks,” interior ministry spokesman Sediq Sediqqi told reporters in Kabul. “We are currently trying to clear those areas which the Taliban attacked five days ago. We are going to intensify our offensives. We will use massive support, and air support as well. There is [already] a clear sign of a setback [for the Taliban.]”

Sediqqi said that about 150 Taliban fighters had been killed so far, while local officials in Helmand said 20 police and 13 soldiers had died, as well as more than 50 civilians. Sediqqi added the Afghan forces had not requested NATO assistance, but NATO said that its forces had provided close air support as well as intelligence, surveillance and reconnaissance help.

Several Afghan officials alleged that Pakistani soldiers and intelligence officers were fighting with the Taliban—a common claim, as Kabul believes Pakistan provides covert support for the insurgency. “Afghan forces had taken measures against the Taliban’s spring offensives, but they were not prepared for the presence of Pakistani soldiers and the ISI [Inter-Services Intelligence],” said Helmand governor Mohammad Naeem.

Pakistan’s Foreign Office has denied that Islamabad has anything to do with the attack. In a statement issued on June 25, it said: “We reject these baseless allegations.”

The last U.S. troops pulled out of Sangin only last month, handing over their remaining bases to the Afghan forces who have now taken on full responsibility for fighting the militants nationwide.

The clashes in Helmand raised fears of instability as Afghan politics is stuck in a stalemate over the ongoing election vote count, with presidential candidate Abdullah Abdullah alleging massive fraud by his rival Ashraf Ghani.

On Wednesday Jan Kubis also warned of “rising tensions following the second round [of elections], including increasing ethnic overtones.” A contested election result “might lead to protracted confrontation with a danger of a slide into violence,” he added.