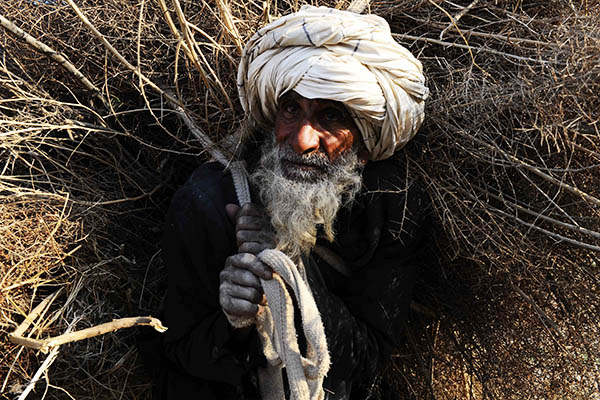 Ghorak village in Kandahar province has been under siege by Taliban fighters for several months, leading to food shortage.

Residents of an Afghan village blockaded by Taliban fighters have resorted to eating grass due to food shortages, according to a report released on Monday revealing the country’s worsening insurgency.

The International Crisis Group (ICG) said that the withdrawal of U.S.-led troops had coincided with renewed ethnic and tribal feuds, government forces fighting each other and mistreatment of locals by Afghan soldiers and police. It also alleged that neighboring Pakistan had failed to crack down on safe havens from where Taliban leaders are able to direct the insurgency that erupted after the extremists were ousted from power in 2001.

The ICG report detailed how Ghorak village in the southern province of Kandahar has been under siege by the Taliban for months, leading to a severe lack of food. “Ghorak’s district center remains under government control today, but Taliban roadblocks restrict the food supply,” it said. “People in the besieged pro-government enclave say they have resorted to boiling and eating grass.”

The ICG cited an unnamed resident in Ghorak who was interviewed by telephone last month.

“We have been speaking to these residents for some years,” said Graeme Smith, ICG’s Kabul-based analyst. “They were already starting to have trouble keeping grocery stores stocked with food last year. Eating grass is one detail that illustrates the problems with supply lines and the isolation of outlying districts.”

The ICG report concluded that “the overall trend is one of escalating violence and insurgent attacks” in Afghanistan, where NATO combat troops have pulled out of many areas where they had been fighting the Taliban for years. The insurgents “are blocking roads, capturing rural territory and trying to overwhelm district administration centers,” it said. “With less risk of attack from international forces, they are massing bigger groups of fighters and getting into an increasing number of face-to-face ground engagements with Afghan security personnel.”

All remaining 51,000 NATO combat troops will depart Afghanistan by December, but several thousand U.S. soldiers may remain on a training and counter-terrorism mission if a deal is struck between Kabul and Washington. “While retaining a contingent of foreign soldiers would not be sufficient on its own to keep the insurgency at bay, its absence could prove extremely problematic,” the ICG report said.