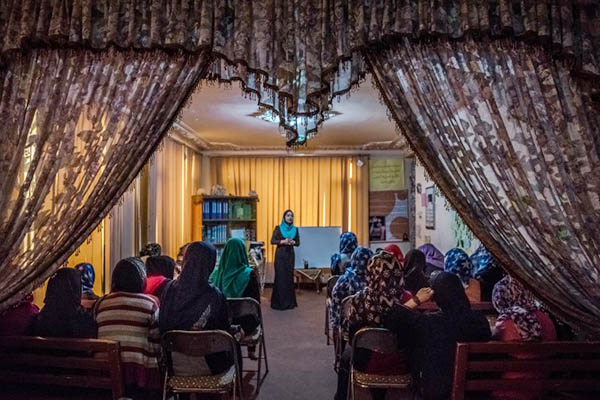 Heavily pregnant at 16 after being raped by an insurgent commander, Malala was on the brink of committing suicide when she found refuge and hope in a women’s shelter in Kabul.

The non-descript building, tucked away in a residential neighborhood in the Afghan capital, is one of the few hidden sanctuaries where battered women can seek support. Managed by the charity Women for Afghan Women (WAW), the shelter has given hope to those such as Malala in a country where rape, abuse and forced marriages are commonplace.

Malala is still tormented by her past, but now wants to channel her energy to build a better future for herself, her child, and others—declaring that she wants to become a police officer in order to “defend women.”

But shelters are hugely controversial, often dismissed as “whore houses” in the conservative country, still one of the worst places in the world to be a woman.

Cameras monitor the entrances discreetly and curious onlookers are viewed with suspicion. “Nobody comes here,” said Najia Nasim, the WAW director in Afghanistan. “Even our [male] employees do not know where the center is. This place must remain confidential.”

Such extreme caution is well founded. Most of the women here are in danger of being killed by violent husbands or vengeful relatives.

Thirty shelters have been established across 13 Afghan provinces since the end of the Taliban regime in 2001, mostly by WAW with financial support from the United Nations and some European powers. It is a rare but real achievement for women in a country that ranks a dismal 152 out of 155 nations in the global Gender Inequality Index.

“Before the shelters, there was nothing for these runaway women,” said Benafsha Efaf, the WAW director for Kabul. “Many families have disowned the girls for shaming their [tribes], which makes them vulnerable to violence. We are their last chance and their ultimate hope.”

According to U.N. Women, a specialized agency of the world body, 87 percent of Afghan women experience violence in one form or another during their lives, 62 percent of them multiple times. The traditional system sanctifies male domination, and nearly four decades of conflict have exacerbated violence within Afghan households, U.N. Women says.

Cultural attitudes often make women, some very young, a bargaining chip to settle a debt or acquire a new wife, notes Efaf. That was the painful fate of 15-year-old Aisha, picked up by the police in a brothel at the age of six. She was sold after her mother’s death by her father, who wanted to remarry. “I was too young to face so many problems in my life,” she says, swaddled in a pink shawl. “But here everyone has a terrible past and I often say to myself: ‘Aisha, you are not alone, these women are like your mother and your sisters’.”

When AFP visited the shelter, it was hosting 45 women and 18 children, most referred by other Afghan institutions. “For 10 years, we have tried to sensitize the police, prosecutors, ministries and even the mullahs,” said Efaf. “It is the police who most often send us these women in distress.”

The shelter is legally required to resettle the women, often through mediation with their families. “We try to find a solution, but if we fail we pass on the case to our lawyers, and the women stay here until the case is resolved. That can sometimes take up to four years.”

Often at stake is the custody of children, who are often automatically entrusted to the fathers.

Humira, who has been at the center for six months with her three daughters aged between two and eight, fled her heroin addict husband who beat her badly. “With all this violence, I still have a headache,” Humaira said. She waits for the judge’s decision over the custody of her children. “He [the father] vowed to sell our three daughters to remarry,” she said.

While the cases are being settled, family ties are usually broken, and the women end up staying in the shelters for between six months and five years, a time spent on regaining confidence and healing old wounds.

Many pursue an education or a vocational training, learning to value autonomy and freedom. Some emerge from there to get a job and share an apartment with other former residents of the shelter, though some are too broken to make any progress, says director and psychologist Wira Farawal.

Malala has already regained her lost confidence. Though traumatized by her past, she learned to read and bonded more with her baby, a product of rape. She has named her son Nazif, which in Persian means “pure.”