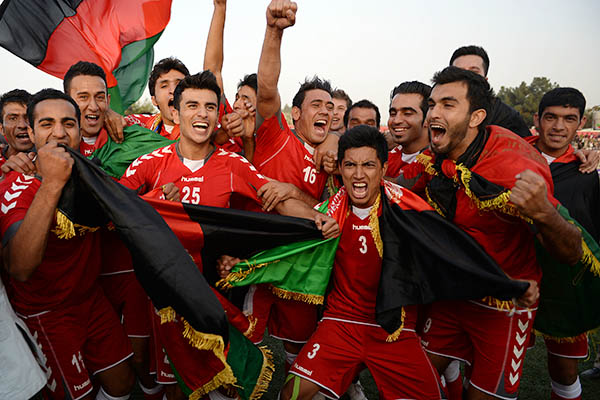 Afghanistan’s football team sparked rowdy celebrations across the war-battered nation Tuesday after securing a convincing 3-0 win over Pakistan in the first international match in Kabul for 10 years.

A delirious 6,000 capacity crowd packed the Afghanistan Football Federation (AFF) stadium for a game that unleashed a wave of patriotic pride in a country beset for decades by war, poverty and Islamist extremism.

Afghanistan, ranked 139th in the world just above Pakistan, dominated the game from the kick-off and stretched three goals ahead mid-way through the second half.

The match was promoted as a symbol of football’s ability to foster peace and unite countries in a shared love of sport, but the result was celebrated by many Afghans as a sweet victory over an old and bitter adversary. “I am a huge football fan, and this match was so important for us,” said Shabir Ahmad, 27, a government employee at the match. “There are a lot of rivalries between Afghanistan and Pakistan, even if this match was meant to boost friendship.”

Political ties are badly strained between Afghanistan and neighboring Pakistan, which blame each other for bloody violence plaguing both countries.

Many in Afghanistan are convinced that Pakistan pulls the strings behind the 12-year insurgency that has raged since the Taliban hardliners were ousted in 2001.

“This was a great victory for Afghanistan,” Afghan coach Yusuf Kargar said after the game. “I hope it brings the message of peace for both nations.”

Just a small number of women were in the stands, and there was no sign of Pakistani support despite thousands of Pakistanis living and working in the Afghan capital.

Security was intense with several rings of armed riot police and soldiers beating back frustrated ticketless crowds locked outside of the stadium.

Kabul has been hit by a series of militant attacks this year, including near the president’s palace and on the Supreme Court, and the Taliban have vowed to step up violence as elections loom early next year.

One spectator, Ahmadzai Fazeli, 25, said that insurgents at a Taliban roadblock in volatile Wardak province had wished the team well.

“On the way here the Taliban stopped me. I told them I was going to the football match, and they happily let me pass,” he said. “Now I am here feeling very patriotic and happy.”

Ahead of kick-off, tempers frayed as police struggled to control unruly crowds pushing to get into the game, which was attended by some senior Afghan officials and foreign diplomats, including the British ambassador.

But the final whistle triggered delirium as players paraded the national flag in front of dancing spectators and crowds celebrated on the city streets.

The game, which was played on an artificial pitch funded by the FIFA world body, was the first home international since Afghanistan played Turkmenistan in 2003. Afghanistan last played Pakistan in Kabul in 1977, before the Soviet invasion, a brutal civil war and the Taliban’s 1996-2001 regime.

Football was not banned under the Taliban but the old Ghazi stadium in Kabul was a notorious venue for their executions, stonings and mutilations.

Tuesday’s game—at the separate AFF stadium in the city—will be followed on Thursday by the start of the second season of the eight-team Afghan Premier League. A return match is scheduled in Lahore in December.