‘Don’t Be a Muslim’: After Boston, Fear Grips America’s Muslims 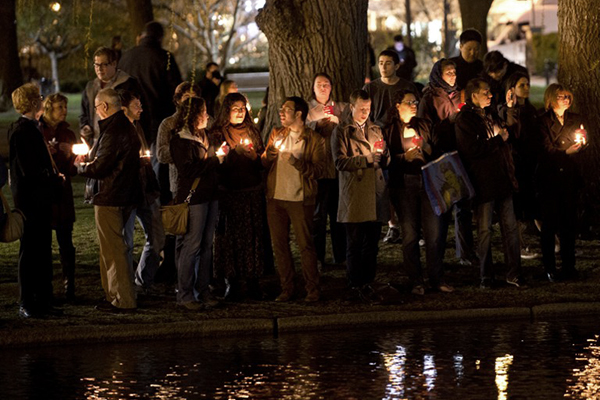 A vigil in the Boston Public Gardens, April 16. Don Emmert—AFP

Excitable media reports, prejudice against them since 9/11 lead American Muslims to fear fallout from the Boston Marathon blasts.

Muslims in America are watching closely as the probe into the Boston bombings unfolds, fearing a backlash—like that after the 9/11 attacks—if an Islamist link is confirmed.

Several Muslim groups issued statements within hours of Monday’s double bombing at the Boston Marathon, strenuously condemning the attacks which killed three and injured more than 100 people. Investigators said on Tuesday that the range of possible culprits remains “wide open,” as speculation ranges from homegrown rightwing or white supremacist extremists to foreign Islamist groups or an Al Qaeda-type cell.

A spokesman for the Council on American-Islamic Relations, Ibrahim Hooper, said the Muslim group had already received “the usual hate calls,” but nothing major as yet—and underlined its main message was condemnation. “You don’t want to create the impression that you’re more concerned about vandalism at a mosque, or something like that, than you are about a violent attack that takes the lives of individuals and injures many more.” But, he added: “In any of these cases that’s something that’s in the back of our mind, that there’s a possibility of a backlash. We’ll just have to see how the investigation develops.”

The number of FBI-designated hate crimes against Muslims and Arabs in America shot up dramatically after the September 11 attacks, which were quickly attributed to and owned by Al Qaeda, which deployed a team of mostly Saudi hijackers.

Amid the torrent of accurate and not-so-accurate reporting as the Boston Marathon bombing story broke Monday, at least two news outlets inaccurately reported that a Saudi national was being held as a suspect. CNN reported the two bombs may have used “pressure cookers”—a type of device referred to in a 2010 online magazine article by Al Qaeda in the Arabian Peninsula, entitled “Make a Bomb in the Kitchen of Your Mom.”

No Islamist or other link has yet been confirmed. But Sahar Aziz of the Institute for Social Policy and Understanding think tank said Muslims should be wary. “Because the stereotype of Muslims as terrorists and disloyal has become entrenched within American culture, there is a strong likelihood that Muslims in America will face backlash if the suspect is a Muslim. Such backlash could take the form of hate crimes, mosque vandalism, evictions off of airplanes, school bullying, and scapegoating in certain media outlets,” she said.

The Los Angeles-based Muslim Public Affairs Council (MPAC) posted a link on its Facebook page to a Washington Post story headlined: “‘Please Don’t Be a Muslim’: Boston Marathon Blasts Draw Condemnation and Dread in Muslim World.” “Was this thought crossing your mind today? Seems like it was for many Muslims,” MPAC commented, referring to the link.

MPAC chief, Salam Al-Marayati, said: “Terrorism has no faith so it is irrelevant what the culprit will claim as his affiliation. What is relevant is the crime of terrorism, which we as Muslims have been speaking out against. We have confidence in our country, the United States of America, to maintain its tradition of protecting minorities and all people subjected to hate or persecution.”

America’s estimated 3.5 million Muslims make up fewer than one percent of the country’s population, according to a study by the Pew research group published in December. A Pew poll published before the 10th anniversary of 9/11 found that “Muslims in the United States continue to reject extremism by much larger margins than most other Muslim publics.”

the muslims in America may reject Extremism, but the stark reality is that Extremism claims many Muslims. No matter who it is, killing innocent children, women and men, is cowardly and inhuman. may they rot in hell ( and earth).