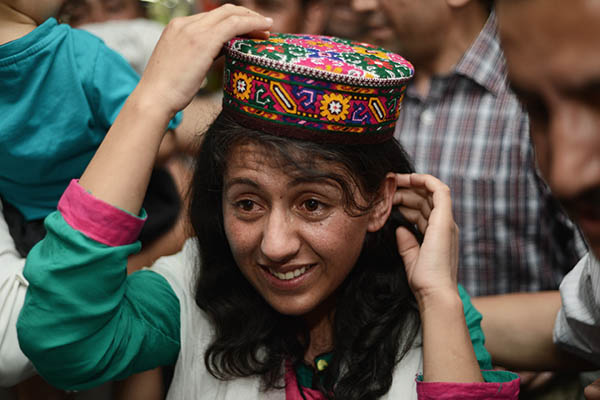 Samina Baig, who became in June the first Pakistani woman to summit Mount Everest, is embarking on an expedition to scale seven major peaks around the world.

On Saturday, Baig and her brother, Mirza Ali, will set off to tackle Mount Vinson (the highest peak in Antarctica), Argentina’s Aconcagua (the tallest peak in the Americas), and five others in Russia, Indonesia, and Nepal. The Adventure Diplomacy Group, which comprises the embassies of Argentina, Indonesia, Nepal, Russia, and the U.S., is supporting the duo’s voyage.

Hailing from Hunza Valley in Pakistan’s northern Gilgit-Baltistan region, Baig, 21, said mountaineering was not merely a sport for her, but also a means to inspire women: “I want to tell women in developing countries that they are as powerful as their male counterparts and they can play an equal role in their respective societies.”

Northern Pakistan is home to some of the world’s most impressive mountains and glaciers and is renowned for its particularly challenging climbs, including K2, the world’s second highest peak. But the climbing industry was badly affected by the massacre of 10 foreign mountaineers at the foot of the country’s second highest mountain, Nanga Parbat, in June.

Ali, an experienced mountain guide, expedition leader, and trainer in the Karakoram, Himalaya and Hindu Kush ranges, said he wanted to push out a more positive message: “Our aim is also to promote peace and love for nature and its inhabitants. We’ve had enough of bombs; we should give peace a chance now.”

Baig said she took inspiration from her own small community in the rugged terrain of the Karakorum mountain range, where she says girls enjoy the same rights as boys, especially when it comes to education. “Our community does everything to educate female children,” she said.

Nestled among some of the highest mountains of the world, Hunza has the highest literacy rate in the country—with female literacy almost at 100 percent.

“When I came to the city for the first time, I saw a completely different world, where people are less educated, poverty is widespread and [the] female is a nonexistent species compared to their male counterparts,” said Baig. “But in my community, women are as important as males and they are playing an equal role in the society.”

With a network of schools and hospitals established by the Aga Khan Development Network, the residents of Hunza have evolved into one of the most developed communities in Pakistan for whom education, says Baig, “is a religious obligation.”