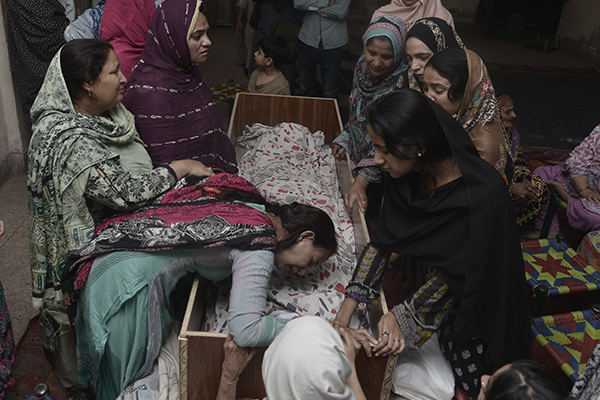 Pakistan’s Army, Rangers and intelligence agencies are continuing raids across the Punjab province following the Easter evening bombing of a Lahore park that killed at least 72, including women and children, and injured over 200.

The Army chief, Gen. Raheel Sharif, chaired a high-level security meeting at General Headquarters, Rawalpindi, to “review progress of ops in Punjab to nab terrorists in the aftermath of the Lahore blast,” Lt. Gen. Asim Bajwa, chief of the military’s Inter-Services Public Relations wing, posted on Twitter. “Intel agencies with Army and Rangers carried out 5 ops in Lahore, Faisalabad and Multan since last night. Ops continue with more leads coming in.”

A “number of suspect terrorists and facilitators,” added Bajwa, had been arrested and a “huge cache of arms and ammunition recovered.”

The “ops” started last night in response to the suicide bombing in Lahore’s Gulshan-e-Iqbal neighborhood. “COAS chaired a high-level security meeting,” Bajwa, referring to Sharif, announced on social media last night. The meeting included the chiefs of the Inter-Services Intelligence directorate and Military Intelligence. “Having evaluated initial info, [Sharif] directed the concerned commanders and intelligence agencies to commence ops ASAP to find linkages and perpetrators of the Lahore suicide attack. The COAS resolved that we must bring the killers of our innocent brothers, sisters and children to justice and will never allow these inhuman savages to overrun our life and liberty.”

Bajwa’s tweets came roughly an hour after he announced, at 9 p.m., that Army troops were also in place in Islamabad to “control the situation and secure the Red Zone.” Since early evening, thousands of rampaging rioters, protesting against the hanging on Feb. 29 of Gov. Salmaan Taseer’s assassin, had taken over the capital’s main street, prompting the federal government to requisition the Army’s assistance.

On Monday morning, the protestors—hundreds of them still camped out in the high-security area near Parliament—relayed several demands, including imposition of Shariah; the execution of all blasphemy convicts, especially Aasia Noreen, a Christian woman who Taseer had fought for; the exile of all Ahmadis from Pakistan; an official declaration notifying Taseer’s assassin as a martyr; and guarantees that the blasphemy laws would not be diluted.

Prime Minister Nawaz Sharif, who chaired a four-hour-long meeting in Islamabad after the Lahore attack, met with bombing victims at Jinnah Hospital in the provincial capital today. The Associated Press of Pakistan news agency quoted the prime minister as stating that “the resolve of the government and nation to fight terrorism was getting stronger.” Sharif, who will make a televised address tonight, said, “Our goal is not only to eliminate the terror infrastructure but also the extremist mindset which is a threat to our way of life.”