Home Lightbox After the Americans Leave 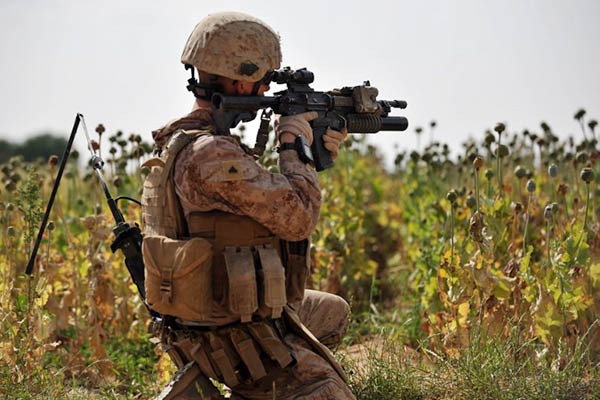 If America leaves Afghanistan this year—as mandated by a deal inked between the Taliban and the Trump administration—the war-torn state is widely expected to decline into civil war between the Pashtun-dominated Taliban who never accepted the agreed ceasefire, and the country’s remaining ethnicities.

The Taliban’s military dominance could see them initiate a purge of Afghanistan through ethnic cleansing of Tajik and other Turkic nationalities in the country’s north, while also targeting the Durand Line—the Pak-Afghan border—that Kabul has historically not recognized. In this scenario, Pakistan faces a chaotic future in its relations with Afghanistan, with India likely taking advantage of the situation.

In February 2020, the U.S. and the Taliban signed a peace deal that eased Washington’s way to discuss the “withdrawal” of its troops from Afghanistan. After the “permanent ceasefire,” it was opined that the U.S. military’s footprint would recede from approximately 13,000 NATO-and-U.S. troops to 8,600 by mid-July 2020. This number was set to reduce to zero by May 31, 2021. According to reports, the war in Afghanistan, which is now America’s longest conflict at 19 years old, has cost U.S. taxpayers $193 billion.

Around 10,000 personnel from 36 NATO member states are in Afghanistan, out of whom 2,500 make up the U.S. share if you ignore the 6,346 “contractors.” Needless to say, America foots the bulk of a bill that has now begun to hurt. If, however, the war is called off, the Taliban would continue their insurgency regardless of the 2020 “peace deal.”

The “practice” under the “Qatar dialogue” between the U.S. and Taliban has seen the insurgents continue targeting Afghan forces, though they have halted targeted killings of foreign troops. This situation would only worsen once the U.S. and NATO troops leave, forcing the 180,000-strong Afghan army to singlehandedly fight the Taliban backed by Al Qaeda and the Pakistani Taliban, along with the Arab and Asian “fighters” fighting jihad in Afghanistan.

No one is betting on the Afghan army maintaining cohesion in the civil war that is expected to engulf the country, with divisions along Pashtun and non-Pashtun identities likely. The Afghan army is dominated by non-Pashtun northern minorities who were oppressed by the Pashtun Taliban when they was in power. Many Pashtuns, the country’s biggest ethnic community, are likely not connected to the Taliban, but remain part of this ethnic rift. Afghanistan has never been a strongly unified nation, but these ethnic divisions intensified during the Soviet occupation of the 1980s, when Afghan resistance got organized along ethnic lines.

It is this divide that has decided the pattern of behavior of Afghanistan’s neighbors, who bring their own defensive strategies into the troubled state. In “A Deadly Triangle: Afghanistan, Pakistan, India,” William Dalrymple (The Brookings Essay, June 25, 2013), described this situation: “As the Taliban, supported by regular Pakistan troops, pushed the Northern Alliance into ever smaller corners of Afghanistan towards the end of the 1990s, India as well as Iran continued to send supplies to the increasingly beleaguered Ahmad Shah Massoud’s Tajik forces. In 2001 India built a hospital at their airbase in Tajikistan so that they could be a place to which they could ferry wounded Tajik soldiers for treatment. Lt. Gen. R. K. Sawhney, the Indian commander who oversaw this program of assistance to the Northern Alliance, recalled to me vividly and with sadness the day the hospital received its first casualty. It was Ahmad Shah Massoud himself, assassinated by two suicide bombers posing as cameramen.”

Pakistan supported the Taliban because of tribal affinities and the “Indian factor,” the growing coordination between the two anti-status quo neighbors. When the Soviet army arrived in Afghanistan in 1979 to prop up the government of the pro-Soviet People’s Democratic Party of Afghanistan (PDPA) against a growing insurgency, all the political parties of Afghanistan took shelter in Pakistan, but most non-Pashtun refugee leaders sensed that Islamabad was inclined to favor the Pashtun faction headed by Gulbuddin Hekmatyar and made the rival Tajik leader Ahmad Shah Massoud feel discriminated against. With the passage of time, the Pashtun Factor expanded into a proliferation of the “Taliban” militias in the northwest tribal region of Pakistan fighting the “Afghan war.”

Rich Arab states also contributed to the anti-Soviet jihad, with Saudi billionaire Osama bin Laden reaching Afghanistan to wage Islamic jihad against both superpowers. Bin Laden ended up staging the 9/11 attacks on the United States in 2001, prompting the superpower to attack Afghanistan. He fled into Pakistan and was the leader of the entire Taliban-led war in Afghanistan, which Pakistan facilitated for a time, caring little for the undermining of its own internal sovereignty through “conversion” of its Army officers. The Pashtun population, living in the “undeveloped” tribal areas, and already subject to “pressured” migration to Balochistan and Sindh, was affected by this voluntary surrender of sovereignty of Pakistan to jihad. Bin Laden became a kind of undeclared sovereign of the state.

Pakistani journalist Ahmed Rashid has observed that “the tribal area has become a melting pot for jihadis from all over the world and the Afghan and Pakistan Taliban, Al Qaeda, Chechens, and the Islamic Movement of Uzbekistan are among the militants who train and take refuge in the tribal region. Furthermore, since the beginning of the Afghanistan war, members of the Taliban have advanced into leadership roles in some parts of the tribal lands, particularly the agencies of North and South Waziristan and Bajaur.”

In May 2011, a decade after 9/11, America struck and killed bin Laden in a “safe house” in Abbottabad, when a small force transported by helicopters raided the compound. So close was the dead man to the Pakistani military establishment and to officers of the military intelligence—who had likely provided him the hideout—that it was suspected that someone from within the intelligence community had informed the Americans about his Abbottabad address.

Pakistan soon discovered that it was losing its internal sovereignty to the Taliban who were asserting their dominance under the Islamic charisma of bin Laden. Increasingly, Pakistan Army chiefs began to feel the pressure of bin Laden’s power within the institution. After former prime minister Benazir Bhutto was assassinated in December 2007 in Rawalpindi. It was discovered that Osama bin Laden had “ordered” her killing through the Taliban. Taliban chief Baitullah Mehsud announced she was working for the United States and was sent to Pakistan to work against the “mujahideen.” It took Pakistan seven years after her death to realize how jihad had turned itself upon the country. Operation Zarb-e-Azb was launched in June 2014 to clear North Waziristan of Al Qaeda and its linked militants.

Today, as the Americans get ready to leave Afghanistan, Pakistan is faced with cross-border aggression from the once-friendly Pashtun Taliban as well as its own Taliban, who fled into Afghanistan after Zarb-e-Azb. Pakistan, once viewed as the lynchpin of military operations in Afghanistan, fears an assault across the “porous” Durand Line dividing it from Pakistan and, southwards, from Iran. This fear gave rise to the idea in Pakistan of wire-fencing the border.

With a 1,640-mile border fence, Pakistan has launched its primary defense against all the elements inside Afghanistan that would lend a hand in doing cross-border terrorism with the backing of India. In 2016, Indian spy Kulbhushan Jhadav was arrested from Balochistan; the fencing started a year later in March 2017. So far, 85 percent of the border has been fenced, and it is expected to be completed this year. So far it has not prevented cross-border attacks on Pakistani troops in Balochistan and the tribal areas.

The wire-fencing consists of two sets of chain-link fences, separated by a 6-foot space filled with concertina wire coils; and a double-fence, which is 11 feet high on the Pakistani side and 13 feet on the Afghanistan side, fitted with surveillance cameras and infrared detectors. Nearly 1,000 forts are also being constructed along the border; and cross-border movement would only be allowed through 16 formally designated crossing-points after the completion of the project costing have a billion dollars.

Pakistan inherited a territory that was largely undeveloped and tribal in its sociology. If you join the tribal areas in the north and Balochistan in the southwest you have more than half of Pakistan adhering to a tribal way of life and therefore not willing to be subjected to the codified municipal law of the state. Pakistan has woken up to the situation but the implementation of sovereign law in these border territories will not be easy. Pakistan has always been troubled economically as it faces up to India, growing at a negative rate in 2021 as India boasts a GDP growth rate of over 11 percent.

India is present in Afghanistan, needed by the non-Pashtun nationalities as a protector but also needed by the Pashtun jihadis for the terrorist “jobs” carried out for money inside Pakistan. India’s footprint in Afghanistan, established steadily over the last decade, allows it to provide financial help and small arms to the Baloch rebels fighting the Pakistani state. It is a perfectly Kautilyan situation where India can “put pressure on the neighbor by favoring the state beyond the neighbor.”

Pakistan has so far subdued militant organizations such as the Balochistan Liberation Army and Baloch Republican Army but today what began in the mid-2000s is in the hands of the moderately active Allah Nazar-led BLF Balochistan Liberation Front. The Baloch nationalist parties in the province participating in the system and avoiding the uprising are the National Party, the Balochistan National Party, and BNP-M, which are non-secessionist, but “protestant” within the Pakistani Constitution.

The building of the Durand Line wall has clearly signaled a deep policy-change in Pakistan. Its Army is led by a non-jihadist general with an extended tenure, Gen. Qamar Javed Bajwa, clearly backing the government of Prime Minister Imran Khan to “normalize” relations with India. For the first time, Pakistan seems to be ready to change its anti-status quo stance towards India and facilitate regional trade, including the China-Pakistan Economic Corridor (CPEC)—and work jointly in Afghanistan, which is a member of SAARC, the South Asian Association for Regional Cooperation.