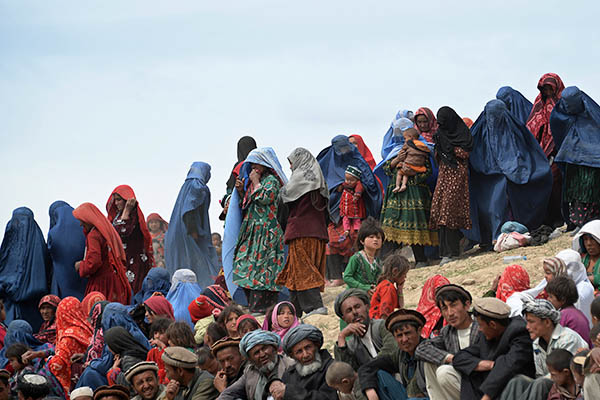 At least 300 people have been reported dead and 700 families have been left homeless in the Aab Bareek village.

Aid groups on Sunday rushed to help survivors of a landslide in northern Afghanistan that entombed a village, killing hundreds of people and leaving 700 families homeless in the mountains.

Much of Aab Bareek village in Badakhshan province was swallowed on Friday by a fast-moving tide of mud and rock that swept down the hillside and left almost no trace of 300 homes. Government officials said the current death toll was at least 300 and warned it could rise by hundreds more, after initial reports suggested that as many as 2,500 people may have died.

Large crowds gathered at the remote disaster site, where rescue efforts were abandoned due to the volume of deep mud covering houses. Only a few bodies have been pulled from the debris.

“Around 1,000 families are thought to have been affected with some 300 houses totally destroyed,” the United Nations Office for the Coordination of Humanitarian Affairs said in a statement. “Assessments to determine priorities on immediate child protection and water, sanitation, and hygiene needs for [displaced] families are continuing.”

It added that 700 families were displaced, with many fleeing their homes in fear the unstable hillside could unleash more deadly landslides. Tents, emergency food supplies, health services and support for children who lost parents were being organized after many survivors spent another night in the open.

Wailing near her father’s destroyed house, Begum Nisa, a 40-year-old mother of three, described the moment when the wall of mud smashed through the village. “I was eating lunch by the window of my house, then suddenly I heard a huge roar,” she said. “I shouted to my family to save themselves, but it was too late. I have lost my dear father and mother. I also lost my uncle and five members of his family.”

Local people and emergency workers had used shovels to try in vain to dig out anyone trapped alive. Relief work has now turned to caring for survivors.

“We have erected 150 tents, handed out food and set up a mobile health clinic,” said Abdullah Faiz, provincial director of the Afghan Red Crescent Society. “It is a difficult operation because of rough terrain and lack of roads, and there is still a possibility of another landslide.”

Many villagers were at Friday prayers in two mosques when they were engulfed by the torrent of mud, and a second landslide hit people who came to help those in need. “Our house was totally destroyed, we are destroyed and our life is destroyed,” said Bibi Khanum, 55, sitting in a tent provided by the Red Crescent. “My husband was killed under the rubble and four of my young children. I am going crazy without them, repeating their names time and time again.”

Afghanistan held a national day of mourning on Sunday after President Hamid Karzai expressed his condolences to those who had lost loved ones. “We have a list of around 300 people confirmed dead,” Badakhshan governor Shah Waliullah Adeeb told reporters at the scene on Saturday. “We cannot continue the search and rescue operation anymore, as the houses are under meters of mud.”

There was no official update on the death toll Sunday, and the exact number of fatalities may never be known.

Badakhshan is a mountainous northeastern province bordering Tajikistan, China and Pakistan. It has been relatively peaceful since the U.S.-led military intervention began in 2001, but has seen increasing Taliban activity in recent years. The landslides follow recent severe flooding in other parts of northern Afghanistan, with 159 people dead and 71,000 people affected by floods in Jowzjan, Faryab and Sar-e-Pul provinces.