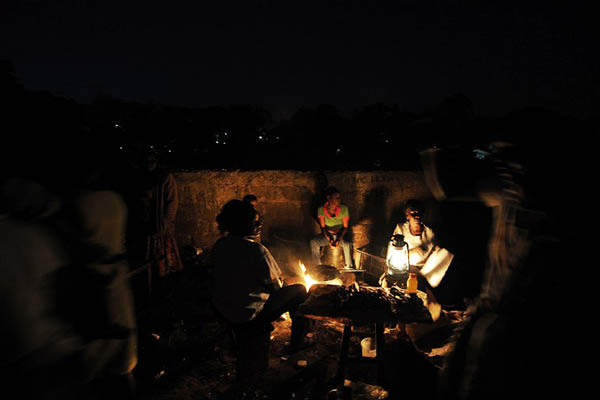 Outdoor air pollution from sources as varied as cooking fires in India, traffic in the United States and fertilizer use in Russia, claim some 3.3 million lives globally every year, researchers said Wednesday.

The vast majority of victims—nearly 75 percent—died from strokes and heart attacks triggered mainly by long-term inhalation of dust-like particles floating in the air. The remainder succumbed due to respiratory diseases and lung cancer, according to a study in the journal Nature.

Smoldering cooking and heating fires in India and China were the single biggest danger—accounting for a third of deaths attributed to outdoor pollution, said study co-author Jos Lelieveld of the Max Planck Institute for Chemistry in Germany. The new numbers support a 2014 World Health Organization report that blamed a similar number of deaths on outdoor pollution, and another 4.3 million per year on pollution within the home or other buildings.

Unless stricter regulations are adopted, the number of deaths from outdoor pollution would double to 6.6 million by 2050, the team of international researchers forecast. “If this growing premature mortality by air pollution is to be avoided, intensive control measures will be needed especially in south and east Asia,” Lelieveld told journalists via conference call. He highlighted the “interesting” role of farm fertilizer.

In Russia, the eastern United States and east Asia, agriculture was responsible for the bulk of pollution with fine particles under 2.5 microns in size—small enough to easily penetrate the lungs. A micron is a millionth of a meter.

Ammonia released by fertilizer combines with the dangerous sulfates and nitrates in car exhaust fumes, to make the tiny particles. The combination is deadly in the Western world, said the team. Their calculations suggested car exhaust caused about 20 percent of pollution-related deaths in Britain, Germany and the U.S.—while the global average is about five percent.

The team used computer models combining air quality measurements, population and health statistics and data on the health risks of breathing in pollution. Lelieveld said the study offered the most complete picture yet as it included data on the risks in heavily polluted places such as parts of China, while previous research relied mainly on conditions in the United States and Europe.

Humans are not the sole source of deadly air pollution on Earth—desert dust was linked to at least one in 10 deaths, the team added.