Alec Baldwin Hits Back at Trump 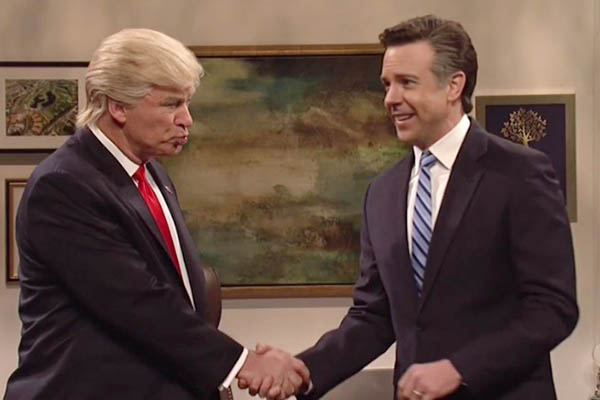 President-elect Donald Trump is getting an earful—and lots of advice—from an actor who lampoons him as an ignorant boob on the comedy show Saturday Night Live.

Trump repeatedly took aim at SNL—and at Alec Baldwin’s now-classic impersonation of him—in the run-up to the election, and on Sunday he took to Twitter again to slam the show as “biased.”

In the latest episode, Baldwin depicts Trump as bumbling and overwhelmed as he sets about naming a cabinet and fulfilling campaign promises like defeating the Islamic State group. “Google, what is ISIS?” Trump, with a wildly enhanced version of the real man’s trademark, lip-pursing scowl, says as he pecks away at a laptop. “Oh my, 59 million results.”

Trump was not amused.

“I watched parts of @nbcsnl Saturday Night Live last night. It is a totally one-sided, biased show—nothing funny at all. Equal time for us?” he tweeted. Baldwin responded by ripping into the president-elect with a blast of tweets of his own.

“Equal time? Election is over. There is no more equal time. Now u try 2 b Pres + ppl respond. That’s pretty much it,” Baldwin wrote. In other tweets, Baldwin said that if he were president, among other things he would “improve the lives of AS MANY AMERICANS AS POSSIBLE,” and “make appointments that encouraged people, not generate fear and doubt.”

This was an allusion to the controversial picks made so far by Trump, including Senator Jeff Sessions, the nominee for attorney general, who is accused of making racist statements in the past, and Steve Bannon, seen as an ideologue of the ultra-conservative alt-right movement, as chief White House strategist.

Addressing Trump, Baldwin concluded thusly: “I could go on. You want more advice, call me. I’ll be at SNL.”