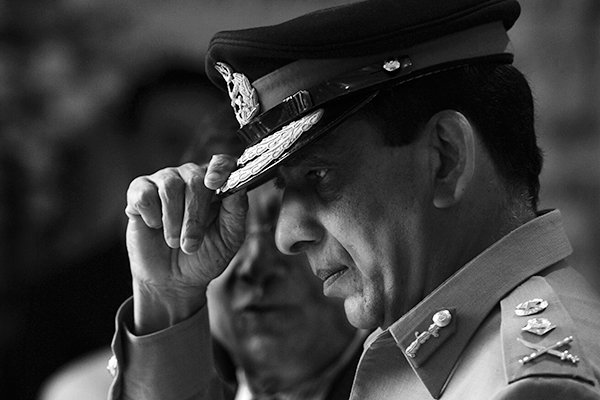 With P.M. Khan seeking a ‘partnership for peace’ with the U.S., a look back at one of the lowest points of Pak-U.S. ties

On June 30, 2021, Prime Minister Imran Khan addressed the National Assembly and repeated his diatribe against the use of drones by the U.S. against its own ally Pakistan, picking targets without warning. He presumed that no one in Pakistan had actually asked the American drones to attack targets inside its territory; a questionable assertion.

American drones, despite all the largely valid controversies surrounding them, helped Pakistan rid itself of the Tehreek-e-Taliban Pakistan’s leadership after it planned and staged attacks against the Pakistan Army and, in some cases, issued photos of slain Pakistani troops. The TTP was also responsible for the assassination of Benazir Bhutto on orders from Al Qaeda, and even though the militants are believed to have largely fled into neighboring Afghanistan, they are still considered Pakistan’s most dangerous enemy.

Then-Army chief Gen. Ashfaq Pervez Kayani, who considered the Taliban the greatest threat to Pakistan’s security, experienced direct assault on his person from the TTP—and from elements who had joined the Taliban and their leader Osama bin Laden from within the Army. In 2009, insurgents laid siege to the GHQ while General Kayani was in his office. The attack began at 11:30 a.m., with heavily armed militants driving up to the outermost checkpoint of the military headquarters in a Suzuki high-roof van. They were wearing Army camouflage uniforms.

Journalist Zahid Husain, writing in No-Win War: The Paradox of U.S.-Pakistan Relations in Afghanistan’s Shadow (OUP 2021), has presented a most credible portrait of Gen. Kayani and his troubled tenure as Chief of Army Staff (2007-2013). He has also thrown some light on why Pakistan “colluded” with the strategy of using American drones against the TTP. “Considered by many analysts as one of the most powerful military generals in Pakistan’s history, General Kayani was a reclusive man. He was a night person and would engage in discussions till late at night, even when in active service. General Kayani had led his forces in one of the most successful counterinsurgency campaigns in a treacherous terrain. He was a thinking soldier and had a strategic mind.

“Although he was credited with the restoration of democracy, the specter of military continued to cast shadows over the political spectrum. Despite constant conflicts with the civilian leadership, he did not permit the democratic process to get derailed. General Kayani oversaw the democratic political transitions (2008 and 2013) during his six years in office.”

On Nov. 26, 2011, NATO forces attacked a checkpost at Salala on the Pak-Afghan border and killed 24 Pakistani troops. No one knew what happened except Pakistan, which alleged “it was a pre-planned attack.” Significantly, in the wake of the attack, Pakistan got its cable news operators to take BBC World News off the air for showing a two-hour documentary, Secret Pakistan, which had included claims by Taliban commanders that they had been taught bomb-making by members of Pakistan’s intelligence agencies, who would also tip-off high-ranking Al Qaeda figures about imminent attacks.

Gen. Kayani pledged a crushing retaliation if the U.S.-ISAF forces attacked inside Pakistani territory again, “regardless of consequences.” Addressing his troops, he said: “Be assured that we will not let the aggressor walk away easily; I have clearly directed that any act of aggression will be responded to with full force, regardless of the cost and consequences.”

During his speech, the Army chief also explained why the Nov. 26 airstrike at Salala did not prompt an immediate response: “Timely decision could not be taken due to breakdown of communication with the affected posts and therefore lack of clarity of situation at various levels, including corps HQ and GHQ,” he said. Just a few months earlier, in May, he had likewise been unable to explain the 8 years Al Qaeda leader Osama bin Laden spent in Abbottabad before being assassinated by U.S. forces in another “surprise” attack. Now, he said, troops deployed on the border with Afghanistan should take independent decisions on how to respond to any future NATO attacks without waiting for orders from the GHQ. For that, he assured them, appropriate weapons would be supplied. The message was clear: troops would now fight U.S.-ISAF forces instead of Taliban terrorists.

Pakistan’s relationship with the U.S. during Gen. Kayani’s tenure was akin to a rollercoaster. The events of 2011 led to the ostensibly allied states downsizing their relationship from strategic to merely transactional. In fact, there had never been any real strategic convergence in the alignment that emerged after 9/11. The unilateral U.S. Navy SEAL raid on bin Laden’s compound, and the fact that the world’s most wanted terrorist had been living in a high security garrison town, came as a personal humiliation for the Army chief, putting his authority among his soldiers it stake.

But Kayani was reluctant to launch a military operation in North Waziristan; the last bastion of the Pakistani Taliban under the powerful Haqqani Network remained a controversial issue and a major sticking point in Pakistan’s relations with the U.S. He had consistently argued with U.S. officials that there was no military solution to the conflict in Afghanistan, stressing the need for a negotiated politic settlement with the Taliban, which is what finally happened.

Taking on the Taliban

Gen. Kayani may be criticized for his inaction during his second term, but one must acknowledge the fact that it was his counterinsurgency strategy that helped re-establish the writ of the state in most tribal areas and territories of Khyber-Pakhtunkhwa that had been lost to the Taliban. After clearing Swat, Kayani launched simultaneous operations in South Waziristan and other tribal areas that turned the tide against the militants.

On Aug. 14, 2012, Kayani, in his Independence Day message, spoke about the need to eradicate militancy and extremism from the country. He said this amid a new situation of concern created by speculations concerning a major military operation with the U.S. to clear North Waziristan of terrorist sanctuaries. Rumors that the Pakistan Army was getting ready to attack North Waziristan rang loudly following improvement in ties with the U.S., particularly after a visit to Washington by then-ISI chief Lt. Gen. Zaheerul Islam. “The fight against extremism and terrorism is our own war and we are right in fighting it. Let there be no doubt about it, otherwise we’ll be divided and taken towards civil war. Our minds should be clear on this,” he said in his statement.

Kayani candidly accepted that “all are to share the blame—some more, some less.” This presumably included the Pakistan Army, which is the most powerful institution in the country. Such an open confession should have been taken as an earnest attempt to break new ground, rather than cling to doctrines that had been exploded by circumstances. The Army had not yet announced to the nation that it had decided to attack North Waziristan. But various stakeholders were already opposed to the idea. One retired military analyst said on TV that before going into North Waziristan the government should be made to go to the people and get their support.

On Nov. 28, 2013, Kayani stepped down as COAS, which ended a decade long chapter of him being a focal person—first as head of the ISI and then as Army chief. During the latter period, he was often in a contentious relationship with the U.S. and a partner in an often pugnacious strategic dance. His successor certainly had his work cut out for him. In addition to continuing the fight against the Pakistani Taliban, he would have to help the U.S. find a politically safe way of getting out of the Afghan conflict.

Prime Minister Nawaz Sharif, unsurprisingly, chose a dark horse as the country’s new Army chief. It was Sharif’s way of playing it safe by picking relatively low profile namesake officer, Gen. Raheel Sharif, for the most critical and powerful post in the country. Having been ousted by his handpicked chief once, and given his history of tumultuous relations with all others holding the post during his past two terms, Sharif had become more cautious.

He ignored General Kayani’s recommendation and instead picked an unassuming man with no past baggage and lower on the seniority list; considered a safe bet, Gen. Sharif’s appointment signified a complete break from the Musharraf-era military hierarchy. A critical issue was how civil-military relations would evolve under the new military leadership.

Gen. Sharif viewed jihadists, principally in the form of Pakistani Taliban, as the country’s greatest threat, and sought the help of the U.S. in countering it. He had a reputation of being non-political. But the Army chief in Pakistan is also, politically, the most powerful man; and he soon found himself being pushed into the political power game. Most worrisome for the military leadership was the mounting discontent within the ranks, particularly among junior officers.

It was this pressure that forced the new Army leadership to provide protection to former Army chief Musharraf and avoid his appearances before a special tribunal for treason for several months. The former president finally appeared after a reported deal that he would be allowed to leave the country after the indictment.

But that did not happen. Nawaz Sharif would not let his tormentor out. The most sensitive issue that was souring relations was the government’s ambivalence over the military’s war against militancy. The backlash by a newly independent media was also a sore point; as was clear from Kayani’s meeting with a select group of journalists in 2012.

Reacting to the public debate unleashed by the reopening of the so-called Mehrangate—also known as the Asghar Khan case, which alleged that Army chief Gen. Aslam Beg and president Ghulam Ishaq Khan had helped rig the 1990 elections by bribing several politicians and journalists—case at the Supreme Court, he said: “If you want to fight with history in this context, it’s your choice to do so. However, establishing institutions require a lot of hard work and the media should be careful that their words do not undermine these [institutions].” He noted that the American media did not criticize “as harshly as the Pakistan Army was criticized by Pakistanis.” He further elaborated: “Ruthless criticism of ISI in Pakistan was far higher than any criticism made on RAW, Mossad or the CIA in India, Israel or USA.”