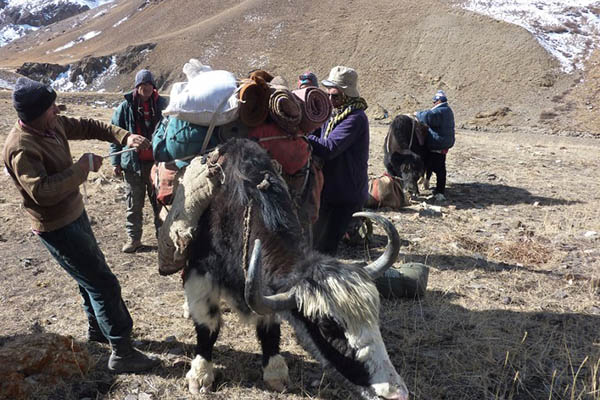 Residents of mountain regions, lacking money, still rely on barter of yaks and cattle in exchange for traders’ wares

Trader Afzal Baig tugs at his horse, frustrated by its stubborn refusal to take another step along a treacherous, snow-covered mountain pass that is peppered with the skeletons of those who have already failed the journey.

The Irshad Pass, a narrow trail more than 16,300 feet above sea level, is part of the ancient Silk Road network, used for centuries by traders from northern Pakistan’s Hunza valley to cross the Karakoram mountains into Afghanistan’s windswept, barren Wakhan Corridor.

One wrong step through the ragged mountains can end in a fall of thousands of feet, and as Baig’s horse refuses to budge a blizzard is growing. “Don’t trust this route,” Baig tells an AFP reporter accompanying his group. “It can betray you anytime.”

They are riding to meet the Wakhi tribe, inhabitants of the remote corner of Afghanistan, who will barter yaks and cattle in exchange for the traders’ wares. It is a treacherous journey made by only a handful of people each year through the “Pamir Knot,” where three of the highest mountain ranges in the world converge.

Baig knocks snow from the horse’s shoe, and the party resumes their careful journey. The storm has reduced visibility to just a few feet forcing each man to follow the sound of the horse in front of him.

Human skulls and other bones are scattered in caves along the route, skeletons that Baig says are the remains of other traders. He has already lost six of his travel partners, buried in avalanches along the trail. Three of them were killed in one accident, their bodies not found for nearly a year.

Baig’s customers in Wakhan have no money, but neither does he. The basic currency unit is livestock. Three warm hats equals one sheep, half a dozen plastic watches equal two sheep or a goat, and 10 kilograms of tea or five kilograms of flour equal one yak.

A secondary currency is yak butter, stored in the stitched stomach lining of a dead goat or a sheep. Highly prized, one such package can be traded for 10 packets of cigarettes, or three pairs of shoes, or six to eight pairs of socks.

“I hope to get three yaks,” Baig says after the group make camp later that night.

Trade with the people of the Wakhan Corridor is his “ancestral legacy,” he explains. His elder brother and his father both walked these trails before him until old age finally brought their trading to a halt.

The residents of Hunza, once a princely state that now forms part of Gilgit-Baltistan in Pakistan-administered Kashmir, say barter trade with Wakhan is a centuries-old tradition that has helped cement peace between them.

Aziz Ali Dad, a social anthropologist who has studied the tribes of the mountainous region known as High Asia, describes the present-day barter trade as a small artery of the Silk Road. “In the old days, the tribes on the border of China, Tajikistan, Afghanistan and Pakistan used to trade with each other,” Dad tells AFP.

The Soviet invasion of Afghanistan ended most such interactions. But the route between Wakhan and Hunza survived, he says, largely because trails such as the Irshad Pass are one of the few ways in and it is mainly those with a historic connection that dare to travel them. “The people on both sides of the border share the same culture, the same language and kinship, which is an added advantage,” Dad explains.

As Baig reaches the first settlement in Wakhan, men and women rush to him. The men hug him and take the reins of his horse while the women kiss his hands, a traditional greeting of the Wakhi tribe. “Did you bring me the buttons that I asked you for last year,” one woman asks eagerly as she serves him tea.

The women of the Wakhan Corridor have a strange relationship with time: many of them do not know how old they are, but plastic watches brought by the traders are their most cherished ornaments.

Brightly colored objects—from plastic buttons and bottles to nail clippers—can all be sewn onto women’s clothes as decoration.

One woman already wearing four plastic watches on one arm asks Baig if he has any more. “I need some for the other arm, may be three or four,” she says.

The woman’s family trades a yak, a packet of butter and four sheep for buttons, watches, six pairs of socks and some woolen hats. Two other yaks are given on credit. A male member of the family will travel to Hunza this year and return with flour and rice. He explains: “This is based on trust [that] has existed as long as the trade itself.”