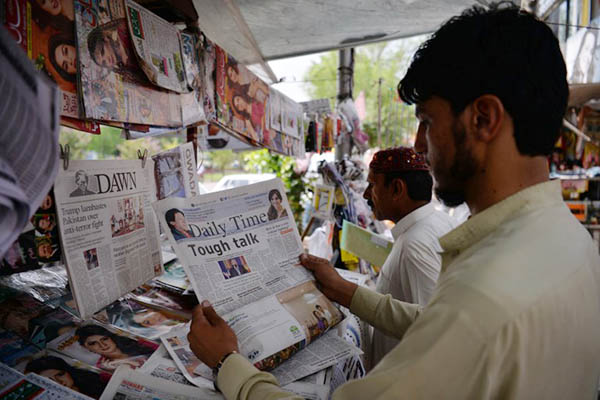 Angry and offended Pakistanis fired back on Wednesday against U.S. President Donald Trump’s accusations that their country harbors militants, highlighting the heavy toll they have paid fighting extremism and slamming his embrace of rival India.

The U.S. president unleashed blistering criticism of Pakistan this week as he unveiled his new Afghanistan policy, which paves the way for the indefinite deployment of more troops to the war-weary country. Trump accused the country of playing a double game as it accepted American aid but gave safe haven to insurgents who kill Afghan and NATO troops. “We have been paying Pakistan billions and billions of dollars at the same time they are housing the very terrorists that we are fighting,” Trump said.

Pakistan sees India as an existential threat but cannot defeat its much larger neighbor on the battlefield, so has instead allegedly crafted a strategy of supporting militant proxies that include the Afghan Taliban. Such groups are meant to tie down India in the contested Himalayan region of Kashmir and, in Afghanistan, help prevent the rise of an Indian-backed government.

Pakistani civilians have little power over regional strategy but have lost homes and loved ones to militant violence, which has killed thousands in their own country since 2007. Trump’s remarks provoked hurt and outrage among many.

“We have been fighting YOUR war for a decade now, we have lost numerous lives of civilians, our jawans, even our schoolgoing children as well,” wrote Farhan Bashir on Facebook. “Today you are saying this to cover up your failures in Afghanistan?”

Some residents in the capital Islamabad said their country was being treated as a scapegoat after being dragged into the conflict following the U.S. invasion of Afghanistan in 2001. “All the worst things that we are facing is only because [we are] supporting the U.S. in Afghanistan,” said Ameer Hamza. “How could a country shelter terrorists which itself is under the grip of terrorism?”

In Peshawar, which has borne the brunt of vicious militant violence over the years, bank employee Suhail Ahmad said Pakistani troops and police had done their job and cleared the area of militants. “We Pakistanis were suffering from terrorism, but now the terrorists have either been killed or fled to Afghanistan,” said the 24-year-old. “The power is in the U.S. hands in Afghanistan so why don’t they go against terrorists and kill them there?”

Others suggested ditching the U.S. alliance altogether and embracing China, which has been pouring tens of billions into infrastructure investment in Pakistan in recent years. “They have always pressured us for doing more and more. There may be some pro-U.S. voices but I think we should go closer to China,” said Sakhawat Shah, a Peshawar college student.

Editorials in leading dailies urged Trump to be cautious after he called on India to deepen its engagement in Afghanistan, a scenario the Pakistani military establishment dreads. Analysts say the U.S.’s tilt toward India, as indicated by Trump’s speech, will likely encourage the use of Afghan proxies.

Analyst Rahimullah Yousufzai told AFP: “On one side America is asking for Pakistan’s support and on the other side asking India. How it is possible for Pakistan to provide its support in a matter which will strengthen India’s grip in Afghanistan?”

In Karachi, also long plagued by militant violence, shop-owners brushed aside Trump’s criticism. “We need to clean up our own mess, not to rely on any one,” said Rashid Mahmood, 40.

Others noted that Pakistanis have bigger problems than even Trump or militants. “Our daily nightmare is street robbers… we are least bothered by what America is saying,” said Momin Khan, a 42-year-old grocery shop owner, adding: “Trump is a liar and he is anti-Muslim.”