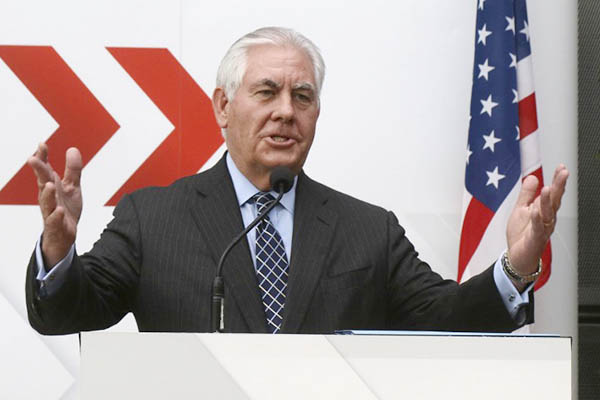 U.S. secretary of state says similar reports happen every six weeks and continue to be false

Representing the United States at a meeting of NATO allies on Wednesday, an angry Secretary of State Rex Tillerson dismissed reports that White House officials are pushing him to resign.

Persistent rumors that Tillerson has strained relations with President Donald Trump erupted into headlines last week when U.S. media cited anonymous White House sources claiming that the top diplomat would be gone within weeks. Tillerson brushed off the reports, but arrived in Europe for talks with E.U., NATO and OSCE leaders this week trailed by questions about his future in the job. Asked at NATO talks why he hasn’t resigned, he responded firmly.

“This is a narrative that keeps coming up every six weeks, and I would say you all need to get some new sources, because your story keeps being wrong,” he told reporters.

Trump appointed the 65-year-old former oil executive as Washington’s top diplomat in April after receiving recommendations from former top Republican security officials Condoleezza Rice and Bob Gates. He was confirmed easily by the Senate after an illustrious career as chairman of energy giant ExxonMobil, and was initially hailed as an experienced manager with a wealth of international experience and contacts. But an attempt to slash the State Department budget while reducing staff numbers and streamlining bureaucracy met resistance from career diplomats, and the slow pace of new hires has frustrated some at the White House.

There have been reports of rifts with Trump, as well. The president’s tweets often appear to undermine Tillerson’s diplomatic efforts, such as when Trump said he was “wasting his time” trying to negotiate with North Korea.

The State Department was also forced to deny a report that Tillerson had in July branded Trump a “moron” in a private discussion with senior officials at the Pentagon. Then, last week, reports surfaced that he would be replaced before the year’s end by CIA director and Trump confidant Mike Pompeo.

Trump has denied this although he did confirm he has had policy differences with Tillerson, tweeting: “I call the shots.”