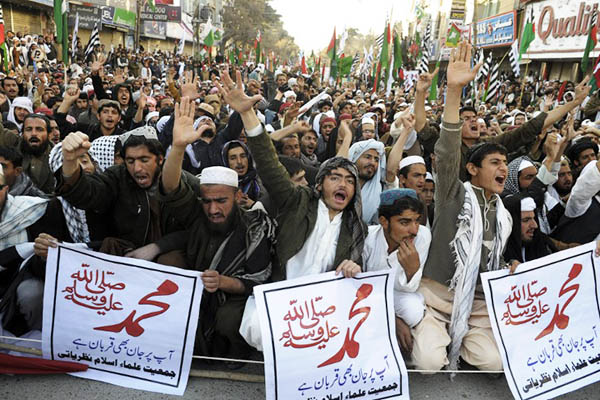 Jamaat-e-Islami calls for U.N. ban on blasphemy in Islamabad demonstration.

Tens of thousands across Afghanistan, Pakistan and Indian-administered Kashmir took to the streets on Friday for southern Asia’s biggest protests yet against satirical magazine Charlie Hebdo’s cartoon portrayal of Islam’s Prophet.

Up to 20,000 demonstrators in the Afghan city of Herat and 15,000 in Pakistan’s Islamabad burned French flags and chanted slogans calling for France’s downfall, while a smaller Pakistani protest saw an effigy of France’s President Francois Hollande set on fire.

In Srinagar, the largest city in Indian-administered Kashmir, police clashed with a contingent of around 3,000 demonstrators after shops and businesses were ordered to close by a leading Muslim organization and several separatist groups.

The clashes broke out when police fired smoke canisters and shot into the air to disperse a group of protestors who began chanting “Down with Charlie Hebdo” after emerging from mosques.

Islamist gunmen stormed the offices of French weekly Charlie Hebdo—which has published controversial cartoons of Islam’s Prophet on several occasions—in Paris on Jan. 7, killing 12 people. In response, Charlie Hebdo last week published a “survivors” issue with an image of Islam’s Prophet weeping on the cover, which has led to small, sporadic protests across Pakistan and Afghanistan.

Friday’s rally in Islamabad was led by the Jamaat-e-Islami (JI) party, and though peaceful, demonstrators burned French, British and American flags, while urging Pakistan to cut ties with Paris and calling for a boycott of French products. Carrying placards and banners, protesters in Islamabad chanted “death to France”, “our Prophet, our honor” and “death to the blasphemers.”

So far public displays of anger against the magazine, which is not available in Pakistan either in print or online, have largely been limited to followers of religious parties. Around 4,000 people rallied in Karachi, while protests in Quetta—where the Hollande effigy was burned—as well as Peshawar, Lahore and Muzaffarabad, the capital of Pakistan-administered Kashmir, each drew around 2,000 activists. No violence was reported from any of the rallies.

Meanwhile in Afghanistan, protesters in Kabul held posters depicting a red heart and the name of Islam’s Prophet as they marched on the streets, while an AFP reporter at the scene in Herat and the provincial governor’s spokesman Ehsanullah Hayat said the crowd there was at least 20,000 strong.

“No Muslim can tolerate insults to our beloved Prophet Mohammed, we demand the French government apologize to all Muslims and punish those who have insulted Islam,” said one protester in Herat. A small number of demonstrators threw stones at the French embassy in Kabul, prompting guards to fire one or two warning shots.

Thousands of miles away, 800 people also took part in an anti-Charlie Hebdo protest in Sydney, Australia, carrying “Je suis Muslim” signs in what police said was a peaceful rally. “They force their worldview onto us: ‘We are the arrogant West and you Muslims have to accept our world view, you have to accept our freedom … to insult your Prophet’,” demonstrator Sufyan Badar told the crowd. “But we rejected freedom yesterday, we reject freedom today and we reject your freedom tomorrow.”

In Abidjan, the main city of Ivory Coast, west Africa, between 200 and 300 people protested the cartoons amid a heavy police presence on Friday, a security source said. Muslims have a slender majority over Christians in Ivory Coast and the two communities live mostly in harmony.