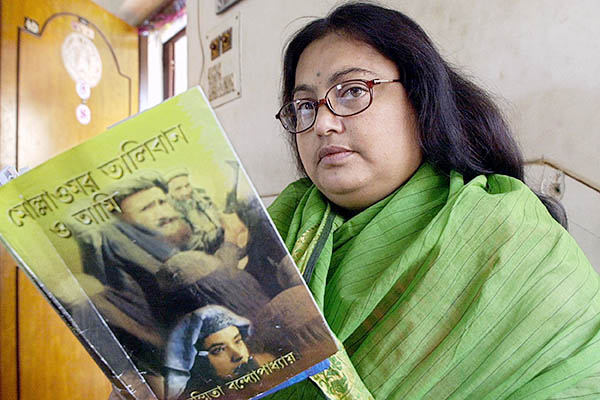 Suspected Taliban in Afghanistan shot dead Indian author Sushmita Banerjee, whose book about her dramatic escape from the militants in the 1990s became a Bollywood film, police said on Thursday.

Police in insurgency-hit Paktika province, in the east of Afghanistan, said they found the body of the 49-year-old on Thursday morning, after the militants dragged her out of her husband’s home late in the night and shot her repeatedly.

“We found her bullet-riddled body near a madrassah on the outskirts of Sharan city (the provincial capital) this morning,” said provincial police chief Dawlat Khan Zadran, confirming earlier reports from Indian media.

Banerjee’s book Kabuliwala’s Bengali Wife, about her escape from the Taliban, was made into a Bollywood film in 2003. Police suggested the book might have been the reason the militants went after her.

“Our investigation … indicates that the militants had grievances against her for something she had written or told in the past,” the provincial police chief said. “She had been shot 20 times and some of her hair had been ripped off by the militants,” Zadran said, adding that masked men had tied up the writer and her Afghan husband before executing her.

The Taliban, who have been waging a bloody insurgency since the toppling of their regime in late 2001, were not reachable for comment.

Banerjee was married to local businessman Jaanbaz Khan and had recently moved back to live with him in Paktika, reportedly to run a health clinic for women there.

Sanjana Roy Choudhury, a publisher from Hay House India, said: “It was courageous of her to have written about her escape from Afghanistan. She married an Afghani and in trying to live a life with her husband there, this is the price she paid. It’s a brave voice that’s been quieted.”

Bengali writer Samaresh Majumdar added: “Her book recounting her life in Afghanistan and her escape revealed the situation in the country. She risked her life by returning to Afghanistan. It was akin to committing suicide.”

In an article Banerjee wrote for Outlook magazine in 1998, she said that she went to her in-laws’ village in Afghanistan in 1989 but was trapped there after her husband made an urgent business trip to India and failed to return.

“Life was tolerable until the Taliban crackdown in 1993,” when the militants ordered her to close a dispensary she was running, she said.

Banerjee made several attempts to escape Afghanistan and in 1994 she made it to Pakistan’s capital Islamabad, but her husband’s family tracked her down and took her back to Afghanistan. “They kept me under house arrest and branded me an immoral woman. The Taliban threatened to teach me a lesson. I knew I had to escape,” she wrote.

She later made another attempt to escape the family village.

“One night, I made a tunnel through the mud walls of the house and fled. Close to Kabul, I was arrested. A 15-member group of the Taliban interrogated me. Many of them said that since I had fled my husband’s home, I should be executed,” she wrote. “However, I was able to convince them that since I was an Indian I had every right to go back to my country. The interrogation continued through the night. The next morning I was taken to the Indian embassy from where I was given a safe passage. Back in Kolkata I was reunited with my husband. I don’t think he will ever be able to go back to his family.”

Award-winning Bengali writer Mahasweta Devi said Banerjee’s death “is a loss to Bengali literature. Her life was threatened in Afghanistan. She should not have risked her life.”