Home Bites Anything but Normal? 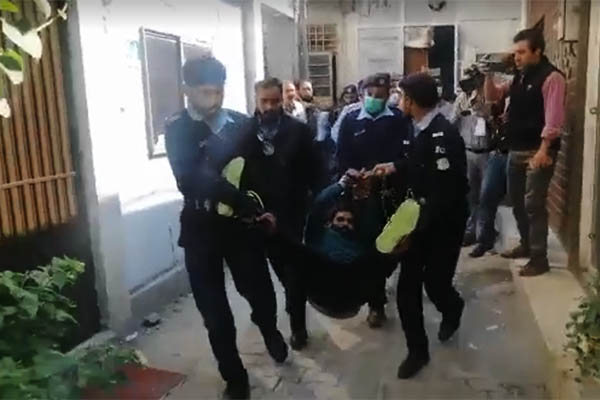 Screengrab of accused Zahir Jaffer being dragged out of court by police after disrupting proceedings on Nov. 10

Zahir Jaffer, the primary accused in the murder of 27-year-old Noor Mukadam, has been expelled from court proceedings in Islamabad twice since his indictment—along with 11 others—on Oct. 14. Each time, the accused has sought to disrupt proceedings, acted erratically and alleged that his life is in danger. This behavior, warn legal experts and the counsel for Noor’s family, indicates he is laying the ground for an insanity plea that could prolong proceedings and delay justice for the heinous crime.

Noor was found beheaded at Zahir’s residence in Islamabad on July 20. The same day, police registered a first information report against Zahir for premeditated murder on the complaint of her father, former ambassador Shaukat Ali Mukadam. The brutality of the case sparked nationwide outrage and demands for swift justice, with protests organized globally to express solidarity with Noor’s family.

On Oct. 14, a trial court indicted Zahir, his parents, three members of his household staff, and six employees of Therapy Works in the case, and the murder trial formally began on Oct. 20.

In the three weeks since the trial commenced, Zahir has disrupted proceedings twice. On Nov. 3, he hurled obscenities at Judge Atta Rabbani and fought with policemen who dragged him out of the courtroom. “He is directed to mend his attitude; otherwise, his attendance will be exempted from the court and he will be taken on a video link from jail,” read a short order issued by the judge. A week later, on Nov. 10, he was expelled from court again for interrupting the judge and demanding a “compromise” with Noor’s family. Police have since registered a case against him for “interfering in the state’s function” in addition to the murder case.

Reports of Zahir’s behavior, some of it caught on video in clips that have since gone viral on social media, have led observers to question if he is trying to secure an insanity plea to escape justice. The theory is further supported by the accused’s behavior in prison, which has been described as “anything but normal” by Jail Superintendent Arshad Warraich.

Denying that Zahir had been tortured in any way—as the accused has alleged in court during proceedings—he said the “irresponsible” statement might have been an attempt to secure the court’s sympathy. “Zahir is being kept under strict security and has been denied perks such as visitors and home-cooked meals,” he admitted. “However, there is no report of any torture,” he stressed.

“He’s not normal, he’s different from other prisoners,” Warraich told Newsweek. “After watching him for over two months, I’d say he’s insane,” he claimed, adding that the accused’s “weird behavior” in court also supported the view that he was not mentally sound.

The legal counsel for the Mukadam family, Shah Khawar, disagrees, hinting at a pre-planned strategy by Zahir to delay proceedings. “Zahir might have been tutored to behave like that so that the court can draw an inference that he is insane,” he told Newsweek. However, he said, this would be more difficult in light of Zahir pleading “not guilty” to the charges framed against him; under the insanity defense, the defendant must admit to the crime and then prove they had not been of sound mind at the time of its occurrence.

Dismissing the growing public perception that Zahir’s behavior would have any bearing on the ongoing trial, Khawar refused to rule out the possibility of the accused filing an insanity plea in future to avoid an expected death sentence. “They [defense] are yet to file it and there’s a separate procedure for that which takes time,” he told Newsweek.

Under the Pakistan Penal Code, prosecutors must establish culpability for a crime by proving that the accused actually committed the act and that they acted of their own free will, intentionally, with a stated motive. For insanity pleas, this process must consider three additional factors.

“One, whether the accused was normal or abnormal before the commission of crime; Second, whether the accused’s abnormality is occasional or constant; Third, whether the abnormality existed when the crime was committed,” explained Justice (retd.) Mazhar Iqbal Sidhu of the Lahore High Court. However, he added, the law did not show leniency towards accused who tried to pretend to be “abnormal” after committing a crime or once a trial began.

Of Zahir’s “insane” behavior since his trial commenced, the former judge admitted it might be an attempt to delay court proceedings and invoke special provisions. “Conditions inside prisons are also often responsible for worsening the mental conditions of under-trial prisoners. However, such behavioral issues cannot affect the case,” he said. “In order to secure an insanity plea, the accused has to undergo a procedure where the court appoints a medical board, which establishes the report after studying the history of the accused,” he explained.

“As chief justice of the Lahore High Court, I myself granted relief to a murderer who was insane; he was not in his proper senses when he committed the crime and was later declared lunatic,” he said, stressing that the insanity plea requires the accused to have been declared “insane” at the time they committed the crime; not during trial.

Legal counsel Khawar, meanwhile, remains optimistic that—barring any unforeseen circumstances—the ongoing murder trial would conclude within the timeframe set by the court. “It’s the fastest trial and we’ve presented our witnesses and the defense would also conclude its arguments in the next two weeks,” he added.

The path to justice is rarely easy and often long. The family and friends of Noor have now spent 4 months agonizing over the events that led to her brutal murder. Even if the murder trial concludes in two weeks, the accused retain a right to appeal that could further prolong proceedings. Noor’s murder devastated Pakistan; it is only through ensuring justice for her that the country can hope to start the long road to recovery.