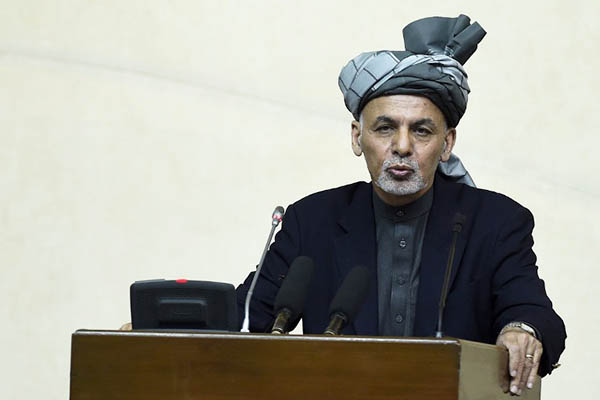 Afghan President Ashraf Ghani Monday implored Pakistan to battle the Taliban instead of trying to bring them to peace talks, in a new hardline stance after a brazen insurgent attack killed at least 64 people.

The assault last Tuesday on a security services office in the heart of Kabul appeared to be the deadliest on the Afghan capital since the Islamists were ousted from power in 2001. It cast a pall over international efforts in recent months to jumpstart Pakistan-brokered peace talks, which stalled last summer after the Taliban belatedly confirmed the death of longtime leader Mullah Omar.

“I want to make it clear that we no longer expect Pakistan to bring the Taliban to the negotiating table,” Ghani said in a somber address to both houses of the Afghan parliament. “But we expect them to launch a military operation against their sanctuaries and leadership based on their soil. If they can’t target them they should hand them over to our judiciary.”

Afghanistan has for years accused Pakistan of sponsoring the Taliban insurgency. The Pakistani government recently admitted after years of official denial that the Taliban leadership enjoys safe haven inside the country.

“There are no good or bad terrorists… Pakistan should act on them as a responsible government,” Ghani said.

Ghani’s remarks reflect his frustration after he expended substantial political capital since coming to power in 2014 in courting Pakistan in the hope of pressuring the militants to the negotiating table. “Ghani is clearly running out of patience with Pakistan,” said Kabul-based analyst Mia Gul Waseeq. “His risky and ambitious diplomatic outreach to Pakistan has failed to yield results.”

Ghani vowed a tough military response against the insurgents and pledged to enforce legal punishments, including executions of convicted militants. “The time for amnesty is over,” he said. “For the Taliban who are ready to end bloodshed, we have left the door open for talks. But the door will not be open forever.”

Taliban spokesman Zabihullah Mujahid rebuffed Ghani’s remarks, saying the group would press on with their jihad against the U.S.-backed government.

The Taliban earlier this month announced the start of their annual spring offensive, vowing “large-scale attacks” across Afghanistan.

The announcement came even after a four-country group comprising Afghanistan, the United States, China and Pakistan held meetings since January aimed at ending the drawn-out conflict. Last Tuesday’s attack, which also left nearly 350 people wounded, was seen as the opening salvo in this year’s Taliban offensive, widely expected to be the bloodiest in 15 years.

Ask ur dears indians, who are deployed along border with Pakistan. u r not sure what to do, u don’t have clear idea of the problem or one can say that ur hosting the problem(indians) then why blaming Pakistan. u ppl never rewarded Pakistan and Pakistan always paid because of u. First understand ur problems then blam ur true enemy