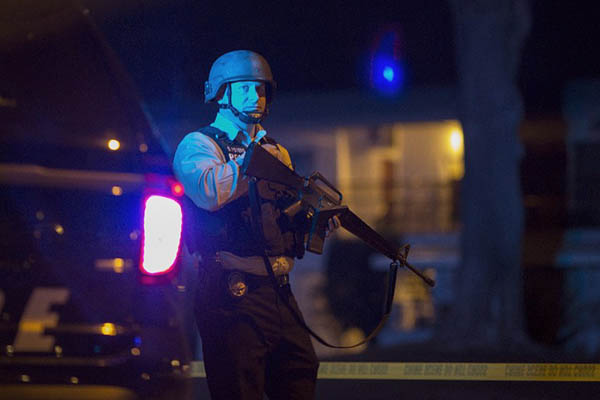 Attackers, who were gunned down by police, have been identified as Syed Farook and Tashfeen Malik.

At least 14 people were killed in a gun attack on a holiday party in California on Wednesday, triggering a massive manhunt that ended when police shot dead two heavily armed suspects—a man and a woman—on a quiet residential street.

The worst mass shooting to hit the United States in three years, the massacre drew an angry response from President Barack Obama, who once again urged Congress to pass tougher gun control measures to stem the spiral of violence. The attackers were dressed in military-style gear and carried assault weapons as they burst into the auditorium where the bloodbath took place, lent out for the holiday party by the Inland Regional Center.

Beyond the 14 dead, the shooting left at least 17 people wounded, including 10 in critical condition. No details have yet been released on the victims’ identities, although police said they were not thought to include any children.

David Bowdich, assistant director of the FBI’s Los Angeles office, said authorities were not ruling out terrorism. “I’m still not willing to say we know that for sure,” he told reporters.

Police chief Jarrod Burguan said authorities were looking at reports the shooting might be linked to a disgruntled employee taking part in the party. “There was some type of dispute or something when somebody left the party, but we have no idea if those are the people that came back,” Burguan said.

“The first one is Syed, Rizwan, last name Farook. He is 28 years old. I am told that he is U.S.-born,” Burguan told a news conference. “The person that was with him is a female. Her name is Tashfeen, last name Malik. She is 27 years old.”

FBI agents in the early evening raided an apartment complex in the nearby town of Redlands, where the suspects were seen before the police chase that ended in a shootout a few miles from the Inland Center. Public records show that a man bearing the same name worked as an environmental health specialist for San Bernardino County.

The California chapter of the Council on American-Islamic Relations denounced the killings as Farook’s brother-in-law, Farhan Khan, prepared to speak at a press conference later in the evening.

It was the country’s deadliest shooting since Dec. 14, 2012, when a young man killed 26 people, including 20 children, at Sandy Hook elementary school in Newtown, Connecticut.

Burguan told reporters the attackers “came prepared to do what they did, as if they were on a mission.”

Investigators were looking at the possibility that the suspects had left behind an explosive device, Burguan said.

As darkness fell on the area, buses transporting people evacuated from the shooting site continued to arrive at the Hernandez Community Center where families and friends awaited news of their loved ones. Witnesses recounted barricading themselves in offices and hiding as the sound of gunfire erupted.

Mark Stutte said his daughter was attending the party organized by the county’s public health department and called him terrified while hiding in a restroom as gunshots rang out in the background. “It was really, really super scary,” he told local TV, as he wept. “I’m far away. I couldn’t do anything for her.”

Lavinia Johnson, the center’s executive director, said her staff hid inside the building that employs several hundred people and waited to be evacuated by police. “It was a very traumatic event for us,” she told CNN. “It was an hour until I learned my daughter was OK,” said Olivia Navarro, 63.””She was frightened when I spoke to her but she seemed calm.”

Obama, who just last week made a plea for action on gun control after three people were killed at a family planning center in Colorado, voiced his anger once more. “The one thing we do know is that we have a pattern now of mass shootings in this country that has no parallel anywhere else in the world,” he told CBS News. “There are some steps we could take, not to eliminate every one of these mass shootings, but to improve the odds that they don’t happen as frequently.”

The Democratic presidential frontrunner Hillary Clinton tweeted: “I refuse to accept this as normal. We must take action to stop gun violence now.”

Wednesday’s shooting, which came less than a week after a gunman killed three people at a family planning center in Colorado, was certain to further stoke the bitter debate about gun control in the United States. In October, a gunman killed nine people at a community college in Oregon before turning the gun on himself.

According to the site Mass Shooting Tracker, the latest attack brings to 352 the number of mass shootings in the United States so far this year.