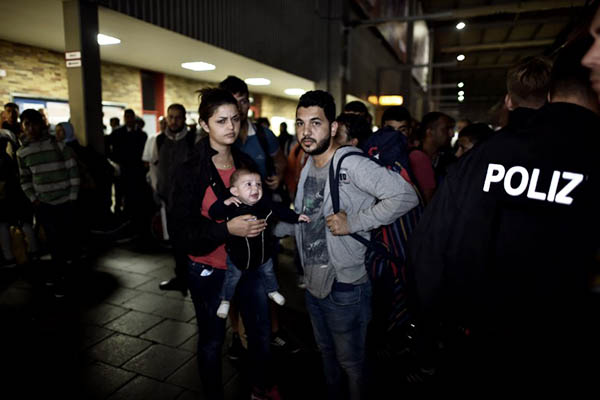 Iraqi family paid over $10,000 in travel costs and to smugglers and reach Germany.

When the train’s map lit up showing it had crossed into Germany, an Iraqi refugee couple felt a rush of peace and joy. They and their baby had survived a hellish journey through the Balkans. At last their dream of a “beautiful life” far from bombs seemed within reach.

Cradling four-month-old Adam, Ahmad and Alia from Baghdad could now relax in the plush evening train from Vienna, among businessmen, tourists and other refugees, amazed at their week-long odyssey from Turkey to Greece, then Macedonia, Serbia, Hungary and Austria. The nightmare, they hoped, was behind them, an exhausting 2,500-kilometer journey, with an AFP team traveling along from the Greek-Macedonian border up to Germany, which many refugees see as a promised land.

“We made it,” smiled 27-year-old Ahmad, who sold his home and fashion store to take his wife and son out of harm’s way. In the past week, the hip young couple with Adam tucked in a baby sling had escaped arrest by border authorities, slept rough when no hotels would take them in, evaded thieves and haggled with greedy smugglers.

In the Balkan countries they had entered legally, they waited long hours under the scorching sun, then shivering at night, to register with local authorities. They were given practically no assistance amid a shocking dearth of government and international aid along the way.

With the AFP photo, text and video team in tow, the couple plodded north by train, bus, on foot, an exodus marred at every turn with the sense they were being exploited. In and out of Hungary, they held their breath as they followed an Iraqi Kurdish smuggler through fields under the moonlight to avoid being fingerprinted and forcibly returned there in line with E.U. rules.

“I just want a beautiful life for myself, for my wife. I want to live like other people, without tension, without stress, without fear,” said Ahmad, his big brown eyes sparkling. Their decision to flee Iraq came in February last year, 10 days after their engagement, when Ahmad took his sweetheart for dinner at a restaurant called Mr. Chicken.

“There was an explosion and all the glass smashed in our faces,” Ahmad said. The scars are still visible, notably on the strikingly pretty Alia who wears her auburn hair tied back in a little bun. The daughter of an academic, her studies were stopped by the Islamist groups that emerged after the 2003 U.S. invasion of Iraq.

“When I was in school, I was attacked by armed men who threatened to kill me because I wasn’t wearing the hijab,” said the 26-year-old dressed in a T-shirt, Levi’s jeans and trainers with fuchsia-colored laces. But she kept looking forward. “We hope at least some of our dreams will come true,” Alia said, on a bus from Belgrade to Kanjiza near Hungary.

Ahmad first tried and failed to get asylum in the United States, so opted for an illegal route to Europe. Alia’s parents did not want her to risk such a trip, but she felt she had no choice. Ahmad, too, hesitated when he saw the rickety fishing boat their smuggler in Turkey was ordering them to climb into, wanting his wife and baby to turn back.

But Alia stood firm: “Either we live together or we die together.”

Pangs of regret overtook her one morning in Budapest, however, when they couldn’t find a hotel for lack of documents. Even a miserable brothel a smuggler tried to take them to was full.

“I can’t tell my mother what we’re going through, she would be too upset,” Alia wept, her eye shadow smudged after another sleepless night.

Not only did traffickers take advantage, so too did vendors selling overpriced water, sandwiches and Red Bull—the energy drink people on the trail guzzled to keep them going—at every turn.

In Serbia’s Presevo camp, hustlers sold fake permits to enable the migrants to skip a daylong queue. Police wore facemasks and refused to answer any of the desperate migrants’ pleas. In a Belgrade cafe, Ahmad begged a smuggler to drive the family to Budapest. In a rare moment of kindness from a trafficker, the man of Algerian origin refused.

“Haven’t you heard about the 71 people found dead in the truck? I’m not taking anyone with babies,” the smuggler said.

When they finally made it to the Hungarian capital, the family was driven up by another smuggler to the border with Austria and told to walk to the other side. Six of their travel companions were arrested, but Ahmad and Alia escaped. Imagining his father was only playing, baby Adam giggled as Ahmad ran.

In mid-week, Alia could no longer nurse her baby. The stress of living like a fugitive had dried up her milk. “Alia hasn’t eaten so she can’t breastfeed Adam,” Ahmad said. “I can’t take seeing my son cry.”

But there were also many beautiful moments.

“The harder the journey gets, the stronger our relationship grows,” said Alia.

Once in Vienna, the first city where the couple did not feel persecuted, they had to plan. All this time they had been running, without knowing where to. After much hesitation they settled on the German city of Cologne, where Ahmad’s sister lives. They would decide later whether to stay there or continue to Holland where they both have family.

At the Vienna train station, the couple shared a kebab sandwich. They could almost taste the perfect ending they had dreamed of, in the arms and homes of relatives. But in Munich where they were due to change trains, the journey came to a bittersweet stop.

There were no cheering crowds, only silence as they were detained by German police, taken to a makeshift facility for registration and then to a grim temporary shelter. Ahmad kept up a brave face as he hugged and kissed his weeping wife. “It’s OK,” he said.

Speaking to AFP from the camp through the phone app Viber, Ahmad for the first time sounded disillusioned. “It’s really crowded here, we are two families in one tiny room and we are still wearing the same clothes we arrived in,” he said. Alia tried to negotiate a better living space but an official snapped: “This is not a hotel.”

Because of the large number of refugees and migrants arriving in Germany it could be months before the family has a place to call home. “I thought that we would be able to rest, however it seems we still have a long road ahead,” Ahmad said, adding: “Thank God, at least we made it.”