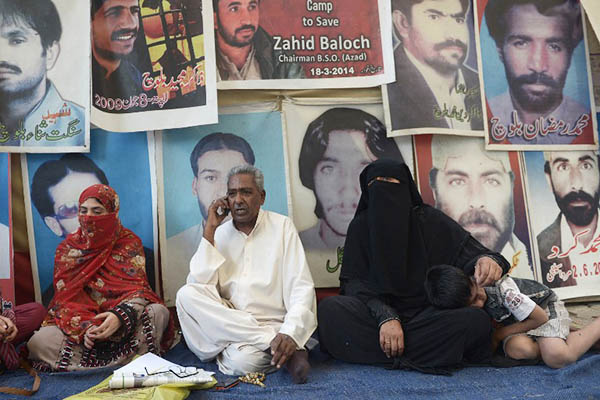 Mama Qadeer Baloch and Farzana Majeed have been placed on the exit control list for ‘anti-state’ activities.

Authorities in Pakistan have slapped a travel ban on an activist who campaigns for human rights in Balochistan province, stopping him going to a conference in the United States, sources said Thursday.

Abdul Qadeer Baloch, known as Mama Qadeer, was stopped at Karachi airport as he was about to fly to New York, where he was due to attend a weekend conference on alleged rights violations in Balochistan and Sindh provinces.

Qadeer is the founder of a pressure group working for information on people who have “disappeared” during the long-running conflict between Islamabad and Baloch separatist movements. Hundreds of people accused of links to separatist groups have gone missing in recent years, allegedly at the hands of security forces. Many, including Qadeer’s own son, show up dead, but many are simply never seen again.

Last year Qadeer led a group of families with missing relatives on a grueling 2,000-kilometer march to raise awareness of their cause and demand answers from the government.

The Federal Investigation Agency (FIA) confirmed to AFP its officers had stopped Qadeer and his companion Farzana Majeed, whose brother is one of the missing, because they are on the government’s “exit control list” (ECL) of people barred from leaving the country.

Majeed said she had visited Dubai only a month ago without any problem. “But last night we went to Karachi Jinnah International Airport, but after check-in, members of FIA told us: ‘You are on the ECL, you people are in anti-state activities so we cannot let you [go]’,” she told AFP. “I am not an anti-state activist, I am only a human rights activist.”

Human rights groups have long accused security forces and intelligence agencies of serious abuses in Balochistan, particularly kidnapping and killing suspected rebels and leaving their bodies by the roadside. According to Human Rights Watch, more than 300 people have suffered this fate—known as “kill and dump”—in Balochistan since January 2011.

Security forces deny the allegations and say they are battling a fierce rebellion in the province, which is also an important smuggling route for heroin from Afghanistan.