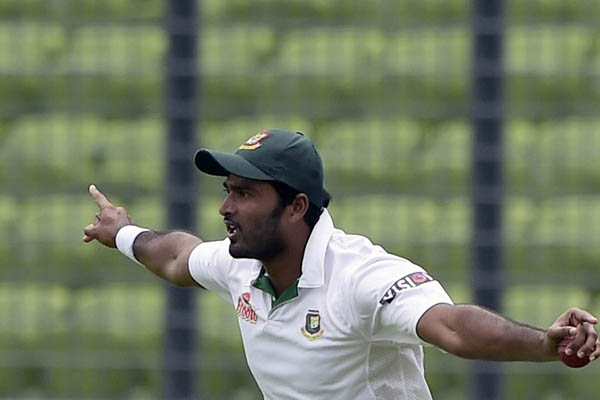 Both Shahadat Hussain and his wife are accused of abusing their 11-year-old maid.

Bangladesh national cricketer Shahadat Hossain was suspended on Sunday from all forms of the game as police probe allegations that he and his wife beat their 11-year-old maid.

Police are still searching for the 29-year-old paceman who went into hiding last week after claims he “tortured and abused” the maid who is undergoing treatment in hospital. “The allegations against Shahadat Hossain have tarnished our image,” Bangladesh Cricket Board spokesman Jalal Yunus told AFP. “We’ve therefore decided to temporarily suspend him from all sorts of cricket being organized by the Bangladesh Cricket Board,” Yunus said.

Police raided the house of the bowler and his wife, Nritto Shahadat, also on the run, last Sunday night after officers found the injured and crying maid on a street in the capital Dhaka.

The maid, Mahfuza Akter Happy, has told local media that the couple beat her. Television footages showed the girl, looking frail and thin, being taken to hospital with swollen black eyes. Police filed a case against the cricketer and are seeking his arrest, with the story dominating local media headlines.

A team of doctors is treating the girl at the Dhaka Medical College Hospital.

Shahadat, who played 38 Tests and 51 one-day internationals for Bangladesh, missed out on the recent series against India and South Africa after twisting his ankle during a Test match against Pakistan in May.